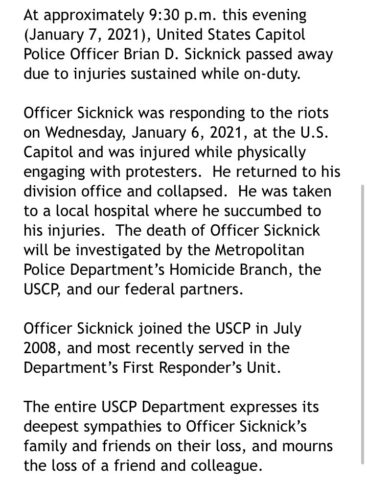 The New York Post says their sources tell them Sicknick “had been struck with a fire extinguisher.”

This is just so horrible. They describe him as a “a President Trump supporter from New Jersey who served in the military — including a deployment to the Middle East — before joining the force.”

“Sicknick, who lived in Virginia, was a 1997 graduate of Middlesex County Vocational Technical High School in East Brunswick, the site reported, citing a 1998 article in the Central New Jersey Home News.

He was a former Air National Guardsman who served in Operation Desert Shield and Operation Enduring Freedom, his brother Craig Sicknick told The Daily Beast.”

He had a blood clot in his brain:

The officer’s family had rushed to the hospital to be by his side earlier Thursday evening when they learned he was on a ventilator with a blood clot on his brain, his brother told the outlet.

“After a day of fighting for his life, he passed away a hero. I would like to thank all of his brothers and sisters in law enforcement for the incredible compassion and support they have shown my family,” his brother told ABC News.

Ted Cruz weighed in early this morning when the news broke, saying “Devastating. Heidi and I are lifting up in prayer the family of the U.S. Capitol Police officer who tragically lost his life keeping us safe. He was a true hero. Yesterday’s terrorist attack was a horrific assault on our democracy. Every terrorist needs to be fully prosecuted.”

I hope they have on video exactly who hit this brave officer with a fire extinguisher and prosecute them for murder. This cannot go unpunished.