CNN is angry that Trump was acquitted by the Senate on Saturday and, like any good lynch mob, they are now going after Trump’s lawyers to get their pound of flesh:

After attacking Trump’s lawyers as nothing but a bunch of liars that had to be constantly fact-checked by the media, CNN actually suggests they should be disbarred for a ‘lack of candor’. Here they are quoting the rule in Pennsylvania requiring lawyers to tell the truth: 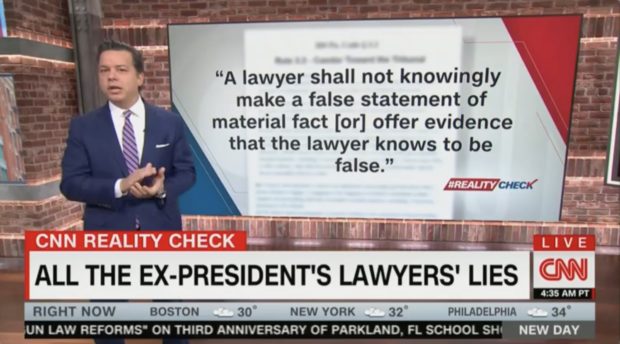 Both of Trump’s lawyers are from Pennsylvania.

This is unbelievable. Since Trump didn’t get impeached by the Senate, CNN is actually trying to get Trump’s lawyers ‘impeached’, so that they never work again as lawyers. They must be seething that Trump’s political career is still alive.

And just to make this point, do you think CNN did any such segment on the House impeachment managers, showcasing all of their lies and fact checks? Hell no.

Hey CNN, what about TJ Ducklow? What about Governor Cuomo covering up thousands of deaths? What about Joe Biden killing tons of jobs during a pandemic?