The blue check Resistance mob — you know, journalists — fell hard today. And yes, I mean they fell in love. Or hate. They do love to hate Trump. Which is why they fell so hard for a faked quote.

See this political scientist and author, with a blue check himself, made up a quote and attributed it to Trump in a tweet. It went out, and went viral, and sat for a long time that way. Journos were pulling out their hair and no doubt scribbling up furious and righteously angry screeds about it. Then someone FINALLY asked the guy if it was real.

And oh man did they turn their guns on him fast. Here’s the original fake quote, as a screenshot because it’s gone now.

Look at those numbers. And that doesn’t even count quote retweets.

2. There’s always room for satire and jokes on this website, but I just did a search of this tweet and many serious people retweeted it and quote tweeted it. https://t.co/LA8VwjCAHL

After they turned on him, he tried to explain it and, you know, keep his tweet live.

People weren’t into that though.

The original tweet went far and wide, but a lot of the tweets were not preserved before they were deleted. Lucky for us, Ted Lieu’s was.

And when I’m posting this, this one from Ana Navarro was STILL LIVE. 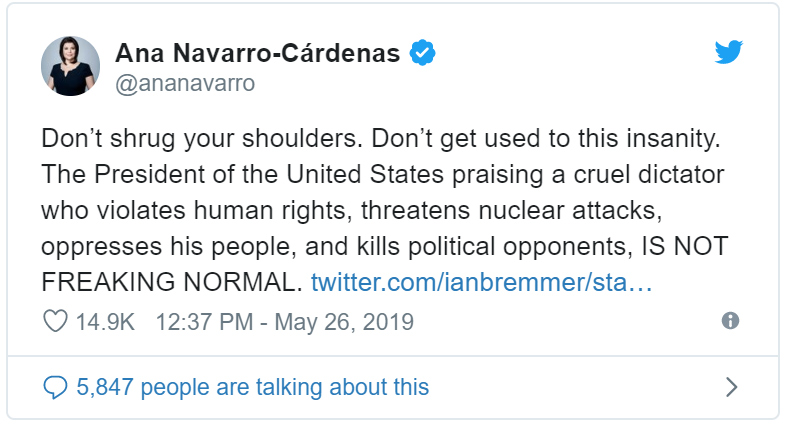 Doing shit like Ian Bremmer did should get your verified status revoked. People see blue checkmarks and assume a level of credibility. Abusing it like that, even “ironically” is a legit fake news problem.

But anyway keep on flipping out about Trump tweeting a semi-edited video of Pelosi. Which was a video and not a typed quote, that wasn’t slowed down (that was a different one) and was simply edited. Please, keep doing that.