This morning on the Hugh Hewitt Show, Senate Homeland Security Chairman Ron Johnson revealed that Republicans on his committee are blocking subpoenas for Comey and Brennan because they are afraid of the optics:

“We had a number of my committee members that were highly concerned about how this looks politically,” the Wisconsin GOP senator told conservative radio host Hugh Hewitt, who pressed Johnson to identify Republicans standing in the way of a wave of high-profile subpoenas.

Johnson emphasized that he needs the unanimous support of his committee’s eight Republicans to advance any subpoenas — one defection would likely result in a 7-7 deadlock with the committee’s six Democrats. “If I lose one, I lose the vote,” Johnson said.

Despite attempts by Hewitt to get Johnson to spill the beans on the Republicans, he refused:

Hewitt repeatedly asked Johnson to name the Republicans on the Senate Homeland Security Committee who would oppose subpoenaing Comey.

“Hugh, I’m just not going to be naming names that way,” Johnson replied.

“If there’s a senator who is blocking a subpoena, we need to know who that is so we throw them out,” Hewitt said later.

Johnson, who said he’s working on the investigation “non-stop,” also refused to commit to calling a vote on a Comey subpoena the next time his committee meets. “Not on a radio show, Hugh. Sorry,” Johnson said, prompting Hewitt to demand an apology from Johnson “to the American people.”

Johnson said Republican resistance had delayed his effort to subpoena Blue Star Strategies, a Democratic public relations firm that did work for Burisma, the Ukrainian gas company that Hunter Biden served on the board of. He also cited the lengthy criminal investigations and the coronavirus pandemic for delaying his committee’s ability to get documents from the FBI, which he said were essential before seeking live testimony from central witnesses.

Johnson said he’s not interested in holding a “show trial” with high-profile witnesses without the documents his committee needs to ask effective questions.

Here’s a photo of who is on Johnson’s committee. I’m not confident which Republicans it might be except for one I’d almost guarantee, and that is Mitt Romney. Who else do you think it might be? 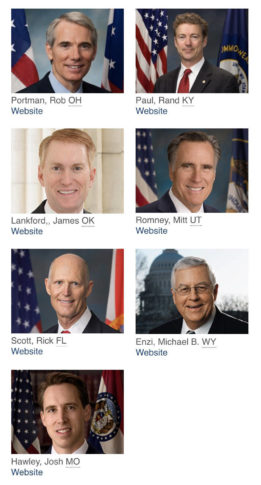