Yeah look I know that headline isn’t very informative but I am stunned. Shook as they say on Twitter. You think the media can’t possibly surprise you anymore and then they do … this.

I still can’t believe it as I’m typing it. “Trump keeps claiming that the most dangerous cities in America are all run by Democrats. They aren’t,” reads the headline. It’s an “analysis” article. The headline is conveys a big GOTCHA point, right? Trump the liar keeps claiming that crime-filled cities are a democrat problem but that’s a big fat lie!!!!!! 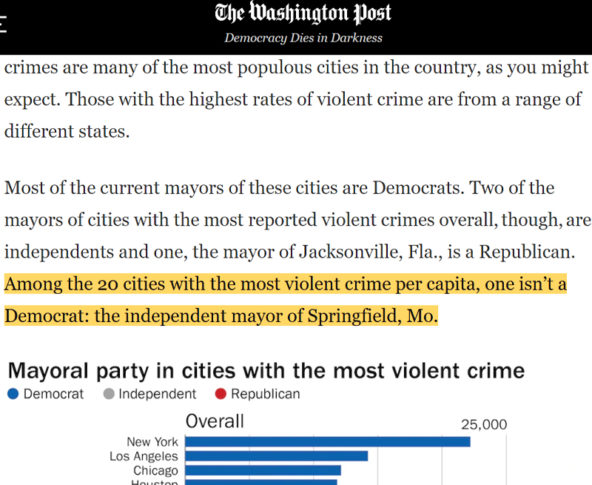 Trump is a complete liar! He says all the the 20 worst cities are run by Democrats but we checked and only NINETEEN of them are!

Law professor David Bernstein noticed it an highlighted it on Twitter. National Review’s David Harsanyi, too.

Trump is factually right, so Bump pivots: well, yes, Dems win urban areas so, of course, they're going to run cities. Imagine a conservative arguing: "sure GOP farming policy is a terrible failure, but it's not their fault because they win elections in rural areas."

It is just flat-out amazing.

Harsanyi is right that Trump is right. And Stephen Miller is right with this jab.

That’s some great work there @pbump. You got him.

Liberals say on social media every dang day that it’s a huge myth the most dangerous cities are the most Democrat cities, but they can’t back it up. Bump set out to do that, and found out Trump was right. He shoulda quit right then but he talked himself, and some fool editor, into going ahead with his premise. And he probably still thinks he’s right. Liberals and especially the ones in media are all broth and no beans.