The DNC has now gone on the record suggesting that Trump celebrating the 4th of July at Mount Rushmore is really ‘glorifying white supremacy”: 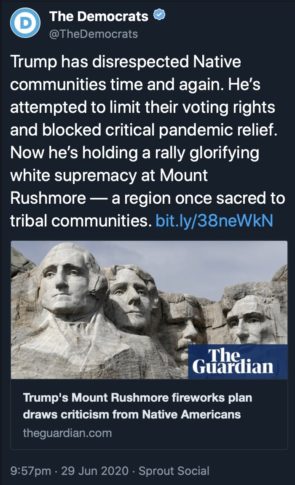 I posted a screenshot because the tweet has already been deleted! It should have never been posted in the first place. Apparently no one at the DNC thought this through.

With all the statues being toppled by Antifa anarchists, the DNC says this about Mount Rushmore? And the 4th of July?

Biden’s going to end up running on a platform of dismantling the Washington, Lincoln, and Jefferson Memorials, isn’t he? https://t.co/ITV0Uqsnef

The Democrats think Mt Rushmore is a display of white supremacy.

There’s no saving this country if Biden gets elected.

The Democratic Party's plan to run on a "Mount Rushmore is racist" platform was truly innovative. pic.twitter.com/HA0uxwKWUO

And this one for the win: