The Daily Beast has written a piece attacking Catherine Herridge, saying that Democrats “and some of her own colleagues” believe she’s pushing conservative conspiracy theories:

Democrats on Capitol Hill have grown particularly irked by Catherine Herridge's work, believing she’s become a de facto clearing house for conservative conspiracy theorists who want to give their material the veneer of mainstream objectivityhttps://t.co/uCqHCBAdA1

I can’t get to the entire article because it’s blocked by a members only paywall. But the subtitle is this:

All of this started when the Biden campaign attacked Herridge as a partisan for putting out the documents showing Joe Biden unmasked LTG Flynn: 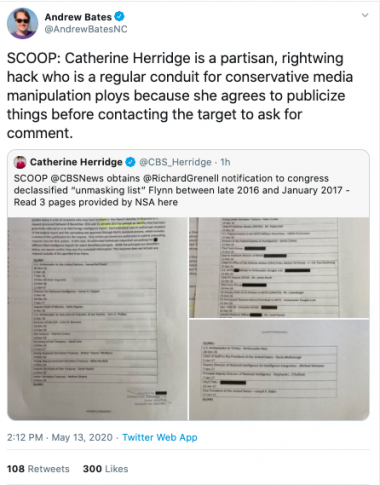 Andrew Bates is the Director of Rapid Response for Team Biden.

In response to this CBS News put out a statement defending Herridge:

NEW CBS News statement tonight on @CBS_Herridge: "Catherine is a deeply sourced reporter who has worked the national security beat for two decades…This is the kind of aggressive reporting we applaud at CBS News.”

As Steve Krakauer noted in a tweet, “24 hours since Joe Biden’s campaign outrageously and unfairly attacked CBS News’ @CBS_Herridge. Not one colleague of Herridge’s has come to her defense – @MajorCBS, @Weijia, @PaulaReidCBS, @margbrennan – no one. @jaketapper is the only prominent media member I’ve seen who has.”

There have been plenty of other response as well, with Glenn Greenwald saying:

There’s a vanishingly small number of journalists at mainstream TV and print outlets who don’t feed at the same trough of official sources & groupthink. @CBS_Herridge is one. Therefore – following the lead of the Biden campaign’s attack on her – she now must be destroyed: https://t.co/zQ5A2iMh85

That’s absolutely what this is. She must be destroyed because she put out the truth and Biden can’t lose to Trump!

Here are some other response that make great points about this:

Left gears up to destroy another American in order to cover-up #Obamagate. https://t.co/QUwYpYZvbM

But when Catherine Herridge, who is a real journalist that breaks real stories, is maliciously smeared, those same reporters are *silent* https://t.co/XIAdDReLLH

What a bad look for journos to join in the government’s attack on a reporter like this https://t.co/M4Xyl0ZIHr

Some pipsqueak on the Biden campaign gets upset because Herridge published a set of government documents <gasp> and so Daily Beast decides to write this garbage story. https://t.co/lR6xXA6HvA

…and this is just accepted as the natural way of things https://t.co/3cTgkF0leP

Call @mkraju a "liberal hack" and the media unites in outrage, circles the wagons to defend him

Attack a female journalist reporting stories liberals don't like and it's game on. How long till they start calling her a bitch publicly? (You know they are privately) https://t.co/1eY9ubft95