Color me shocked, but it appears that Biden is actually backing the state of Israel, saying they have a right to defend themselves against all of these rocket attacks:

As the RNC points out, he doesn’t name terrorist group Hamas or the Palestinians. But that doesn’t bother me very much because Biden didn’t morally equivocate as I expected he would. He clearly said Israel has a right to defend itself and never discussed the ‘claims’ of the other side.

He even noted that he talked with Netanyahu, as well as our other allies in the area like Egypt. But he never said anything about speaking with the Palestinians, as if they aren’t legitimate.

Now I expect that there will be much outrage over his comments (probably already is), and that his administration will put out a statement later today clarifying his comments into some morally equivalence that doesn’t take sides.

UPDATE: White House statement on Biden’s conversation with Netanyahu where he condemned the rocket attacks by Hamas and affirmed Israel’s right to defend itself and live in peace: 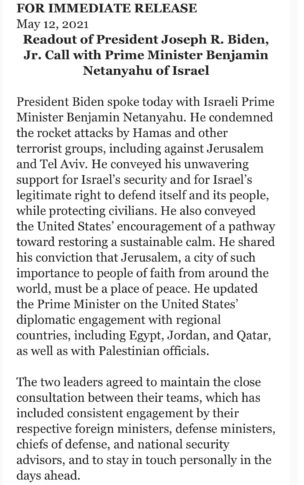