It’s another bad day for the NeverTrump group that was the darling of the #Resistance over the last two years or so of Trump’s presidency. The group put out ad after ad that threw red meat to blue state libs but didn’t really move the election, and they got paid MILLIONS AND MILLIONS while doing it.

Meanwhile, one of their principal figures, John Weaver, was a sexual predator preying on young men. Even underage boys. And though they claim to not have known about it until recently, that ain’t true, says The 19th in a new report.

Some of the leaders of the embattled Lincoln Project knew about sexual harassment allegations against co-founder John Weaver as early as March, multiple sources, including the group’s former executive director, told The 19th late Monday.

Some of the individuals came forward with new details on Monday after they were released from their nondisclosure agreements. Several said Sarah Lenti, a managing partner with the group who was previously its executive director, knew about the allegations against Weaver as early as May 2020. Lenti confirmed that some of the group’s co-founders knew about the allegations as early as March 2020. Schmidt and Galen were among those who knew, multiple sources said.

Only three of the Lincoln Project’s eight co-founders — Schmidt, Galen and Wilson — remain after months of infighting about the group’s management, finances and the allegations faced by Weaver. Stevens, a former strategist for Republican Sen. Mitt Romney’s presidential campaign, joined the group in May 2020.

Independent journalist Ryan James Girdusky was on with Laura Ingraham last night with his own reporting, including that Weaver’s harassment extends farther and younger than was already known publicly. Though when the Lincoln Project knew is still a question…

To top it off, co-founder George Conway, husband to former top Trump adviser Kellyanne Conway, said just a short time ago that it’s time for the Lincoln Project to fold up shop. 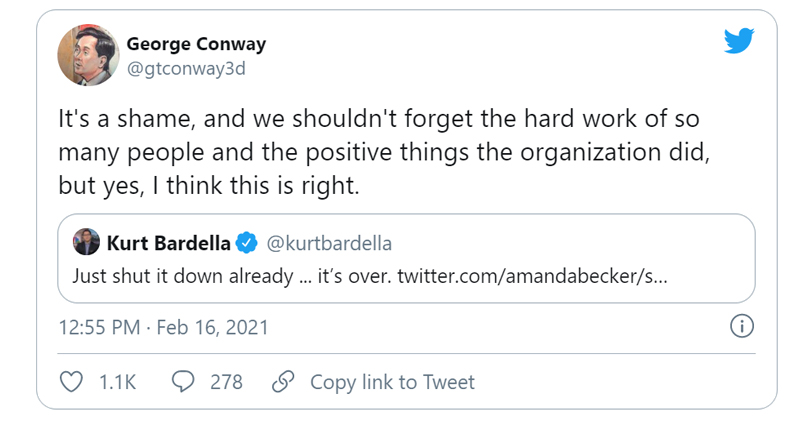