Toxic wokeness is cropping up everywhere.

Last night Libs of Tiktok revealed that a middle school in Pickens, South Carolina actually planned racially segregated lunch meetings earlier this month so that a ‘dynamic speaker’ could help minorities cope with being in mostly white school.

Pickens Middle School, SC held racially segregated lunch meetings to “talk with students about how to cope with being a student in a predominantly white school.” Students were treated to “pizza and dessert.” pic.twitter.com/C1qqzBUy5A

Here’s the letter to the students announcing the special lunch with this woke speaker Adrienne Young: 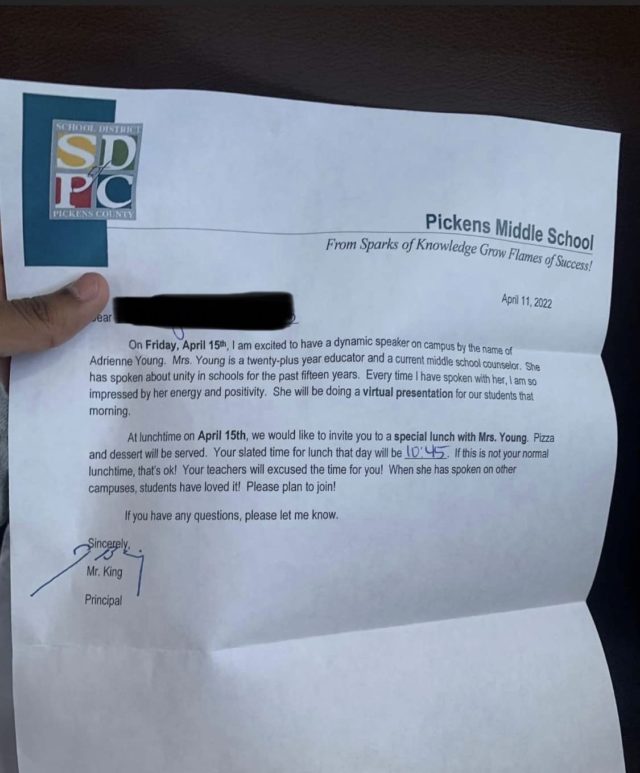 An email sent out to students from the principal reveals that additional lunches were planned with different racial groups to learn “how to cope with being a student in a predominantly white school”: 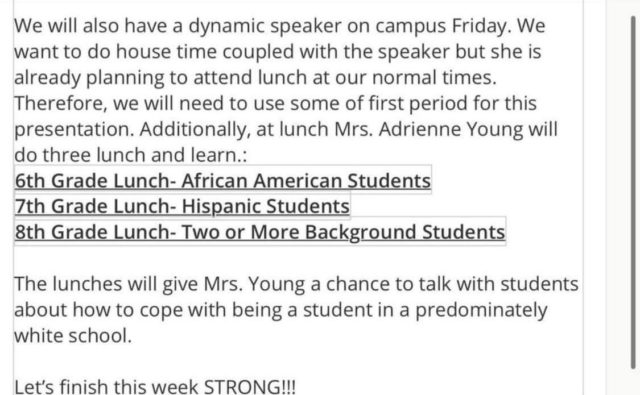 After news of this broke earlier, there was a backlash by parents as you can imagine. The school then decided to open up the ‘additional lunches’ to all students.

The School District of Pickens County said they are opening lunchtime small group learning sessions at Pickens Middle School to all students on Friday based on feedback from parents.

A speaker, Adrienne Young, will be giving a presentation at Pickens Middle about unity on Friday. After the main presentation, the district says the school intended to have small group sessions for “specific minority groups” to allow students a safe space to ask questions.

Some parents reached out to FOX Carolina News with concerns about the learning sessions.

The school district released the following statement, saying all Pickens Middle School students will now have the option to attend the small group learning sessions:

“On Friday, April 15, 2022, a speaker has been asked to prepare a special virtual presentation for all students at Pickens Middle School. Later in the day, there will be 3 follow-up learning sessions. The original intentions were to use these small group learning sessions as an opportunity for students of specific minority groups to ask questions to the speaker surrounded by others like them – to create an increased sense of security for them to be open and candid. In order to make this a more comfortable experience, they decided to provide lunch during these learning sessions. Again, these small group sessions are additional to the main speech that will be provided for all students. Everyone is being included, but the intentions are for those most impacted by the topic to have an extra opportunity to have their questions answered.

One of the Core Beliefs of our school system states that “We believe the cultural diversity promotes full development of the individual and society.” Thank you for your support as we seek to strengthen our shared core values of inclusivity and respect.”

Don’t you love how racial segregation is once again all the rage to woke leftists in the name of security and safe spaces, in order to demonize white students behind closed doors with having white privilege and white guilt.

This woke anti-white racism is the same toxic racism that people like Martin Luther King Jr. fought against decades ago, the very racism these Democrat leftists claim to abhor.

The old is new again.