South Park issued a very mocking apology to China after its show was recently scrubbed from the Chinese internet by upset commies: 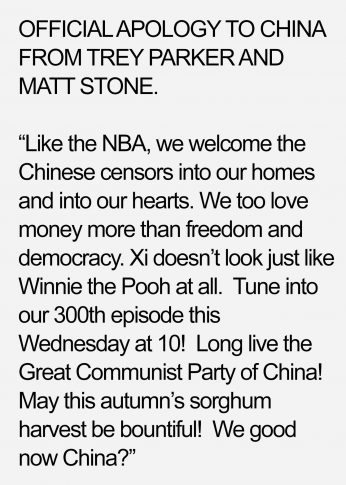 According to Business Insider…

The statement comes after The Hollywood Reporter reported on Monday that “South Park” has been banned from the Chinese internet and videos, mentions, and discussion forums for the Comedy Central animated series had been removed or shut down.

The episode, “Band in China,” references China’s crackdown on Winnie the Pooh imagery, which has become a symbol of resistance to the country’s leading Communist Party and its leader Xi Jinping. The Disney movie “Christopher Robin” did not even play in China last year.

As the insider points out, this statement was also mocking the NBA’s horrible apology to China:

The statement from Parker and Stone also mocked the NBA’s apology to China after the Houston Rockets general manager Daryl Morey tweeted on Friday (and then deleted) an image with the slogan “Fight for freedom, stand with Hong Kong” in solidarity with the Hong Kong protesters. The NBA issued a statement that said it was “regrettable” that Morey’s views “deeply offended many of our friends and fans in China.”

Ted Cruz loved it and retweeted the mocking apology by South Park: