Member (but not FOUNDING member) of “The Squad” Rep. Cori Bush out of Missouri defended a riot that took place on Saturday. Shocker, I know. It was a prison riot, described by corrections officers as “extremely violent” and lasting over eight hours, and Bush protectively referred to them as her constituents and said they need her protection, quoting Martin Luther King Jr. to suggest they are victims who are “unheard.”

“I want to talk to my constituents in the window,” she said, referring to the photo in the tweet she was retweeting showing violent criminals making gang signs through the broken glass of the windows they’d busted out in their violent riot and battles with officers of the law at a jail in St. Louis.

“Their lives and their rights must be protected,” she said of those constituents but not the law enforcement risking their lives, “My team and I are working to ensure that the urgent needs of people who are incarcerated are not ignored.” 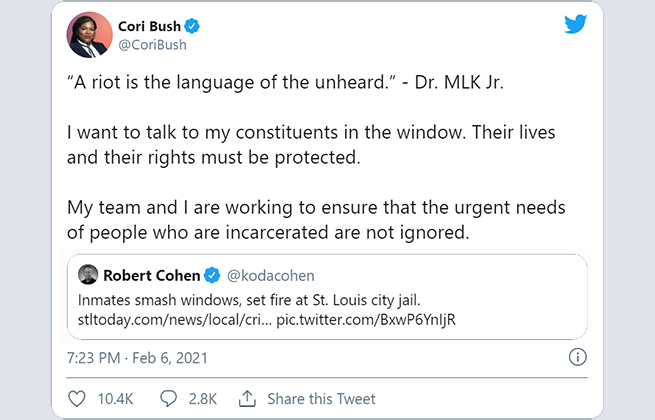 MOST riots are considered good and MOST cops bad, under the normal working of the Democrat party. It is only CERTAIN riots that become the source for impeachments and religious preaching from Jake Tapper and only CERTAIN cops that are such unalloyed heroes they get memorialized in the Capitol rotunda.

Gosh it’s almost like it’s all some kind of political theater, ain’t it?

You want to know the greatest irony? The crooks were rioting over Covid measures that have limited both their access to visitors and attorneys and has slowed the court systems to a crawl.

Y’all reckon Cori is gonna come out for getting rid of Coronavirus restrictions, or nah?