Steven Crowder explained tonight that he’s been blocked by Twitter for revealing fake voter addresses that were really just empty lots and other non-residential areas.

Here’s the video that got him blocked by the fascist Twitter leftists:

Here’s what Crowder wrote about it in the email:

IMPORTANT SUMMARY: No, this is not yet another video “claiming election fraud”. This is a video in which, I PHYSICALLY VISITED AND SHOWED ON CAMERA (WITH A COPY OF THIS WEEK’S NEWSPAPER) voting addresses from this 2020 election, which in fact DO NOT exist.
My crew and I FILMED them ourselves.

Lest you worry about being hoodwinked, let me explain how I did it. I
1. accumulated voter data from government websites
2. checked if the addresses were deliverable by UPS, and
3. if there was a registered property at the address.

I then PHYSICALLY VISITED THE ADDRESS WITH A COPY OF THIS WEEK’S NEWSPAPER, proving that it, in fact is actually just an empty lot, a construction site, a median under an overpass etc.

This is not hearsay. I would SWEAR TO IT UNDER PENALTY OF PERJURY and I showed the results for the entire world to see. 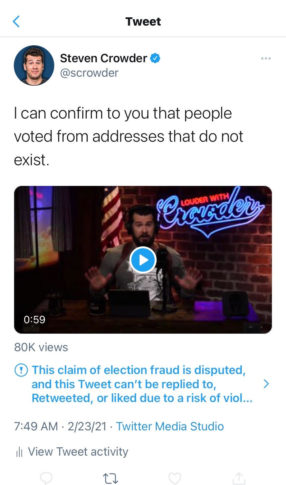 Crowder showed the empty lots in his video. He did the footwork to prove that these addresses just don’t exist, and Twitter blocks him for it? If the Washington Post bothered to do this kind of reporting, they would be hailed by everyone and Twitter wouldn’t dream of blocking them. But because it’s Crowder….BLOCKED!

The leftists at Twitter are clearly just looking for excuses to banish Crowder from their platform. Before you know it, he will be permanently banned, just like Trump.