Muslim Congresswoman Ilhan Omar just can’t help herself when it comes to her anti-Semitism.

Yesterday Haaretz ran an article about Republican leader Kevin McCarthy promising to take action against both Ilhan Omar and Rashida Tlaib for their anti-Semitic attacks on Israel.

The article doesn’t say which attacks McCarthy is referring to, but Glenn Greenwald suggested McCarthy was wanting to punish them for their ‘free speech’ or something:

GOP Leader Kevin McCarthy threatens punishment for @IlhanMN and @RashidaTlaib over their criticisms of Israel. It's stunning how much time US political leaders spend defending a foreign nation even if it means attacking free speech rights of Americans https://t.co/It1fGm1b70

That’s when Ilhan Omar responded on Twitter with more anti-Semitism:

It's all about the Benjamins baby 🎶 https://t.co/KatcXJnZLV

"It's all about the benjamins."

Earlier in the day Omar had tweeted that AIPAC was the group paying politicians to support Israel with these ‘benjamins’:

After all this Ted Cruz responded, calling out Omar’s anti-Semitic attack on both Congress and Israel saying:

"Why is a Member of Congress launching anti-Semitic slurs on Twitter? Caricaturing support for Israel as purchased by Jewish $$—“about the Benjamins”—is an old slander. Do other Dems agree? Will media ask them? As more Dems support BDS, anti-Semitism becoming far too common."

Why is a Member of Congress launching anti-Semitic slurs on Twitter? Caricaturing support for Israel as purchased by Jewish $$—“about the Benjamins”—is an old slander. Do other Dems agree? Will media ask them? As more Dems support BDS, anti-Semitism becoming far too common. https://t.co/1mmI71tLCg

My first reaction to Cruz’s question about other Dems agreeing is that they probably do.

However, surprisingly, there were some yesterday that were willing to go on the record against Omar’s anti-Semitism, like Max Rose from New York:

Congresswoman Omar’s statements are deeply hurtful to Jews, including myself. pic.twitter.com/u3f2JHESFA 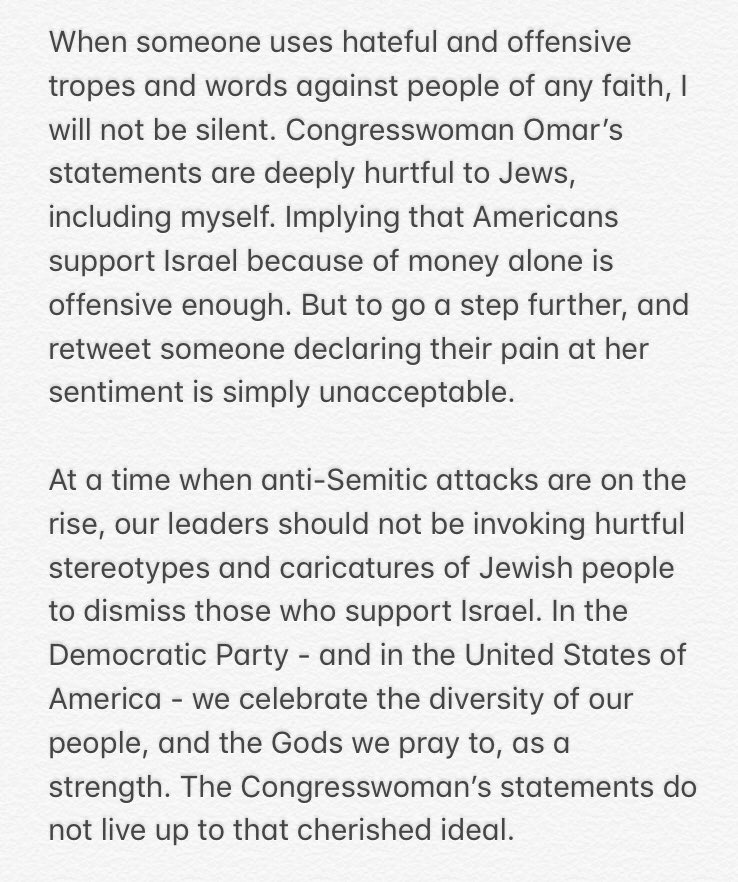 Co-signed as an American. We should expect all elected officials, regardless of party, and all public figures to not traffic in anti-Semitism.

Clinton defended herself too against someone calling her out for ‘piling on’ Omar:

Hi Melissa – I will reach out to her tomorrow. I also think we have to call out anti-Semitic language and tropes on all sides, particularly in our elected officials and particularly now.

You know it’s getting bad when Democrats like this are starting to publicly call out their own freshmen Congresswomen. The question is will more in the party speak out against it?