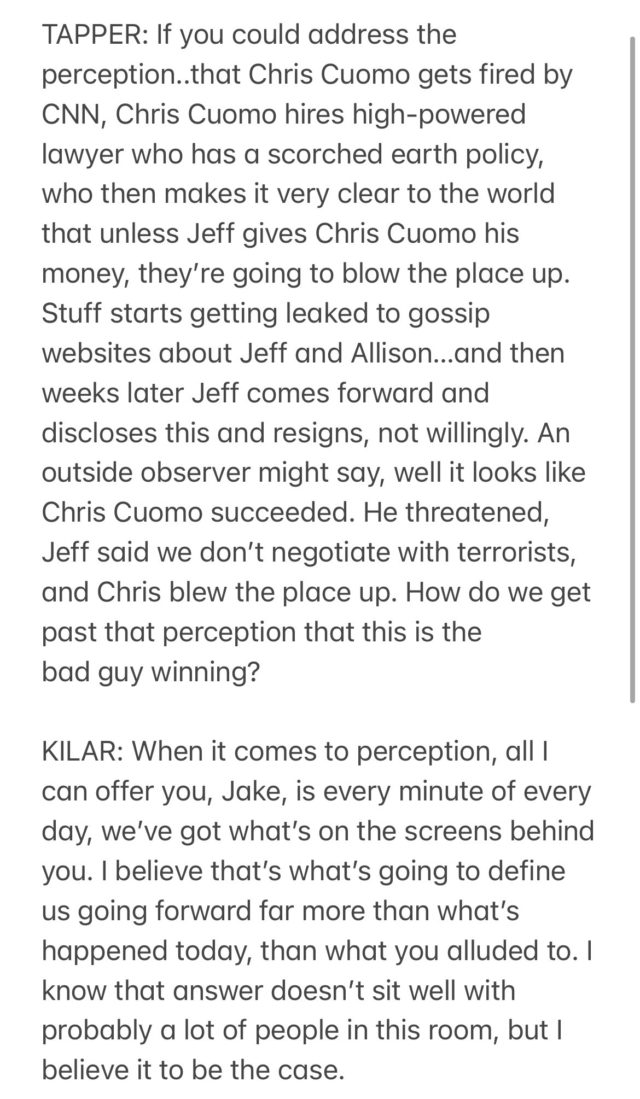 According to Michael Grynbaum, a New York Times reporter, the conversation went on for more than an hour. He shares some of the details of the phone call, starting with the part from Tapper which you’ve already read:

Jake Tapper asked about the notion that Chris Cuomo "blew the place up":

"How do we get past the perception that this is the bad guy winning?"

Kilar responded: "When it comes to perception, all I can offer you, Jake, is every minute of every day, we’ve got what’s on the screens behind you. I believe that’s what’s going to define us going forward far more than what’s happened today."

Kaitlin Collins then jumps in, agrees with Tapper and begins grilling Kilar about Zucker’s ouster:

Kaitlin Collins, CNN's chief WH correspondent, followed up: "I think the issue is that it’s not a perception. What Jake just described is actually what happened here."

Kilar: "I feel that appropriate decisions were made with careful, careful consideration."

Collins also pressed Kilar on the process behind Zucker's resignation.

Q: Did an outside law firm recommend you fire Jeff?
A: "I’m not going to go into the details of the interchange of the outside firm and the body of work that was shared with us."

Q: Were you aware of Jeff and Allison’s relationship?
A: "No, I was not aware of the relationship before this."

Q: Did you consult with other executives before you made this decision?
A: "There is a group of folks that you would expect to be involved in this from a legal standpoint and a HR standpoint."

Kilar was pressed again on whether he consulted with other executives at the company about Zucker's fate.

"When it comes to handling HR matters, you’re absolutely right that I tend not to canvass a large group. I don’t."

I have no empathy for Fake News CNN and if Cuomo did burn down the whole company, it would only be a good thing.