Netflix is headquartered in California, but they do have offices in Texas. Hopefully Paxton will open an investigation.

Meanwhile, #CancelNetflix is trending #2 on Twitter as of the time of this post and was trending #1 earlier today. I think that’s great news, especially if a ton of people are canceling. 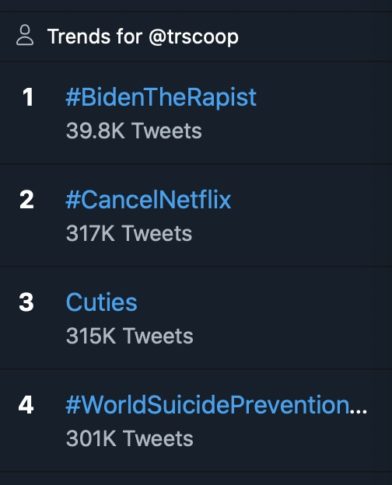 There’s also a Change.Org petition for canceling Netflix subscriptions and it currently has over 604k signatures.

Hopefully all of this is hitting Netflix’s bottom line and they are getting the message loud and clear that this is absolutely unacceptable. I mean seriously, the fact that they even need to hear this message from subscribers says a lot about the company.

You know who gave Netflix a pass for this today? CNN:

A single question about the child pornographic film that #netflix is actively distributing. Nothing.#FakeNewsCNN #CancelNetflix

Do you know how sets work? I do. I’ve directed some of the biggest stars in the world. A director on the Cuties set and a choreographer told 11 year olds to simulate sexual moves repeatedly. What they did should have them charged and registered as sex offenders. #CancelNetflix

As a documentary filmmaker, I’m looking way beyond Netflix.

What sick perverts thought of this concept?

What type of parents allowed their kids to be a part?

Why did no one stop this?

You know how many layers of approval it had to go through to be released?#CancelNetflix

This is a video showing the proper way to use Netflix #CancelNetflix pic.twitter.com/xwdwj7hzq0