Joe Biden picked Kamala Harris as his running mate. It is an “historic” pick, CNN said every 11 minutes since. And every other few minutes we see the utility the Dems and the media will get out of that history.

Take, for example, the firing of an NBA photographer during a pandemic. A freelancer, Bill Baptist, who has been working with the Houston Rockets for THIRTY years won’t be any longer, after he shared a mean meme about KAH-mala on his personal Facebook page.

When former WNBA star Sheryl Swoopes saw Baptist’s post, she shared it on her own timeline and called for the NBA to fire the photographer, writing, “So this guy works for the NBA but covers the Houston Rockets. Has been around for a while. Even worked for the Houston Comets. It’s amazing how people will smile in your face but eventually their true colors will show. @NBA and Houston Rockets he needs to GO!!! So disrespectful. Bill Baptiste (sic) shame on you!!!” 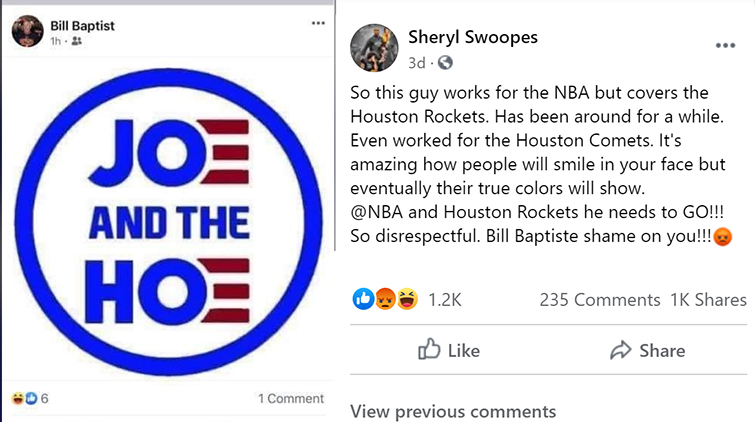 A local station contacted the NBA and got a comment: “The photographer is an independent contractor and his services are no longer being used in Orlando.”

Then there’s Newsweek, which published an esoteric legal analysis of Kamala Harris’ eligibility to serve as Vice President. “Birtherism” is what the media is calling it, although the article did not in any way question the place of Kamala’s birth or the circumstances of her birth certificate. Instead it looked at an often debated (including in the case of Ted Cruz) question about the exact nature of naturalization of a child born to parents who may not have been citizens.

Newsweek was DESTROYED in the press for DAYS. Eventually they had to issue an apology for the cogent legal analysis. But that public humiliation and tail-between-the-legs contrition still aren’t good enough.

How about Tucker Carlson? He was called racist for pronouncing her name the same way Biden does.

Of course, there’s also President Trump. At a presser this week, he was accused of not liking black women.

He was asked about the Newsweek article during a presser and he answered the question. Now every media outlet claims he “floated” birtherism.

You see where this is going.