Yesterday we told you about how the New York Times had written an article smearing Supreme Court Justice Brett Kavanaugh over an obscene accusation that wasn’t even substianted. Well it turns out they finally issued a major correct to the article:

“An earlier version of this article, which was adapted from a forthcoming book, did not include one element of the book’s account regarding an assertion by a Yale classmate that friends of Brett Kavanaugh pushed his penis into the hand of a female student at a drunken dorm party. The book reports that the female student declined to be interviewed and friends say that she does not recall the incident. That information has been added to the article.”

They reported this from a BOOK and didn’t even bother to include the portion from the book that indicated the female student didn’t recall the incident? Talk about fake news.

This is the section from the book, tweeted by Mollie Hemingway: 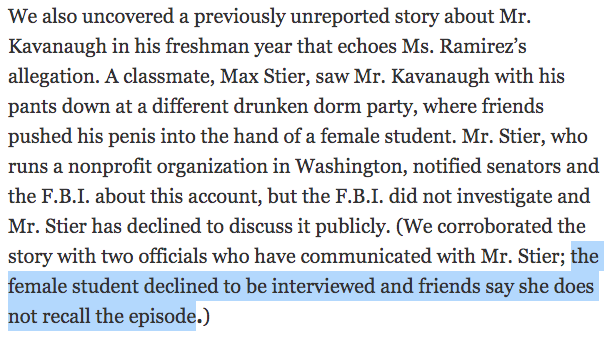 It wasn’t a mistake that the New York Times left this out. It was intentional and malicious.

And it was an effort to get the news media to run with the story, which they did. Just check out the beginning of this interview with Ted Cruz, where the first question he was asked on ABC This Week was about the Kavanaugh smear:

Stephanopoulos said he had already discussed it with Amy Klobuchar.

Trump responded to the correction in the New York Times this morning, saying they should be sued:

“The New York Times walks back report on Kavanaugh assault claim.” @foxandfriends The one who is actually being assaulted is Justice Kavanaugh – Assaulted by lies and Fake News! This is all about the LameStream Media working with their partner, the Dems.

Just Out: “Kavanaugh accuser doesn’t recall incident.” @foxandfriends DO YOU BELIEVE WHAT THESE HORRIBLE PEOPLE WILL DO OR SAY. They are looking to destroy, and influence his opinions – but played the game badly. They should be sued!

He’s not wrong, however I seriously doubt, because of his position on the high court, that Kavanaugh or his family would actually sue the New York Times.