It’s that time of year again and I want to wish a very Merry Christmas to everyone here at The Right Scoop.

As I reflect on Christmas and it’s true meaning for the world, it’s humbling to realize that what God did for us was absolutely the most profound act of love ever to happen in this universe. Period.

The Ancient One, who spoke the world into its very existence and breathed life into our mortal bodies, which He crafted out of mere clay, wasn’t content to let us be cursed forever and separated from Him because of our sin.

For centuries man had been reeling in sin and death because of Adam and Eve’s sin. We had no hope of undoing the mistrust and disobedience that happened in the garden and we were desperately and hopelessly lost.

That is, until God did what seems absurd to our lowly minds. He made Himself small – so small – leaving His glory in Heaven and humbling Himself in a profound way just to restore the covenant that we broke so long ago.

Think about it. In the silence of history the God of the universe, the Ancient of Days, suddenly appeared to a 15-year-old girl in the backwoods of Nazareth, asking if she would be the mother of His divine Son, who would bring hope and salvation to the world. God didn’t appear to king in Rome or to the leaders of Israel. There was no army announcing his arrival. Not a soul knew that God was even on earth except the Blessed Virgin Mary and those she and the Holy Spirit revealed it to afterward. 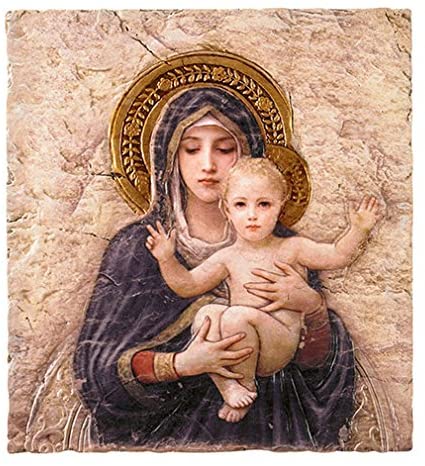 For nine months God lived in the womb of a poor young virgin. So tiny. He was to be born of a forgotten family. And when it came time for His majestic birth, it wasn’t to be in a palace. It wasn’t even in someone’s home. No, the birth of the King of the Universe was in a lowly cave where animals fed; His little newborn body was placed in a feeding trough because there wasn’t a crib or a bed.

See, God doesn’t desire the things of this world which so many of us crave. He wasn’t interested in glory, power, fame, or riches. He didn’t need parades from men proclaiming His arrival. No, God came for one purpose and that was to reunite us with Himself in Holy Matrimony.

It’s impossible to describe the truth of this with mere words; they are so frail and wanting. One has to ponder the profound humility of God to even begin to understand what He truly did for us.

And His sacred birth was only the beginning. We know that God would eventually humble Himself even further. But we’ll save that part for Easter.

For now, spend some time contemplating the humble birth of our King and I hope you all have a wonderful Christmas.