There’s a disgusting cartoon about Brett Kavanaugh’s daughter going around social media and it has been credited to the Illinois Times. 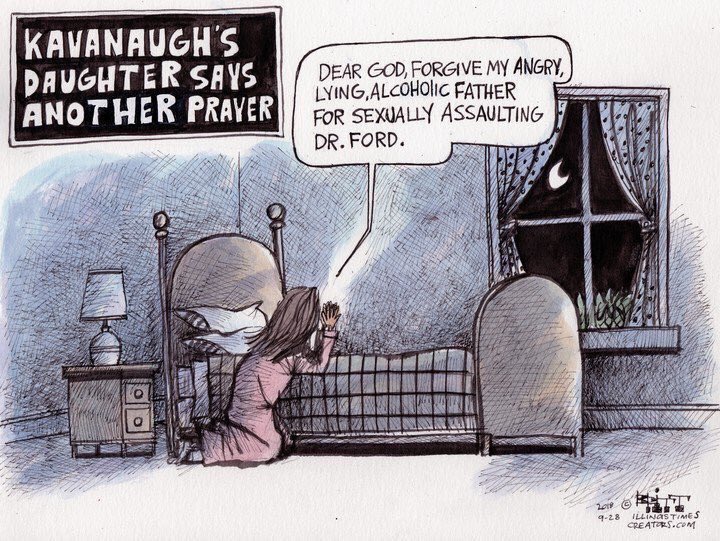 The first I’d seen of it was when Megyn Kelly retweeted it this morning, saying “This is WAY over the line @ILTimes. Wow.”

I went to the Twitter account of Illinois Times and found a statement from them, which revealed they didn’t publish this cartoon at all:

Clarification regarding the Judge Kavanaugh cartoon by Chris Britt:

While Chris Britt is a regular contributor to Illinois Times, he is not an employee and also engages in work for other publications across the country. The recent cartoon involving Kavanaugh’s daughter was posted on Chris’ own Facebook page; it did not appear in our publication or on our website. Illinois Times was tagged in the Facebook post, leading some people to believe it was a cartoon that we had published.

The Illinois Times says they didn't print the cartoon. pic.twitter.com/KF8GgoYr6T

I think the reason it was attributed to them was because Britt listened their name on the cartoon as well as “Creators” which is a website that syndicates content from all sorts of writers.

My guess is that Illinois Times been inundated with complaints from people on social media who believed incorrectly that they had published this. I can understand why people would hate it, because it is disgusting. There’s no doubt about that. But since they’ve clarified that this is not their work, it’s only fair to make sure people know about it.

I have a feeling Britt won’t be able to use their name on any future works of his, especially ones like this.

UPDATE: It’s also not this guy who shares the name of the author:

One day people mistake my @chrisbritt Twitter handle for the CEO of Chime, the other for a cartoonist receiving violent threats. I think I’ll just need to become better known.