“This is encouraging violence against public officials – plain & simple. Absolutely disgusting. No tolerance for this. Haven’t we learned the lessons from Washington D.C. just weeks ago?” said Democrat New York Lt. Gov. Kathy Hochul after reading these quoted remarks.

“There are plenty of strong opinions and online angst these days, but there is no place for inciting violence or threatening people. This tweet should be removed ASAP. Full stop,” wrote Democrat Keith Powers, a New York City councilman.

What is the quote? This one: “If you see anybody from the Cuomo Administration in a restaurant, in a department store, at a gasoline station, you get out and you create a crowd. And you push back on them. And you tell them they’re not welcome anymore, anywhere.” – Maxine CuomoWatch 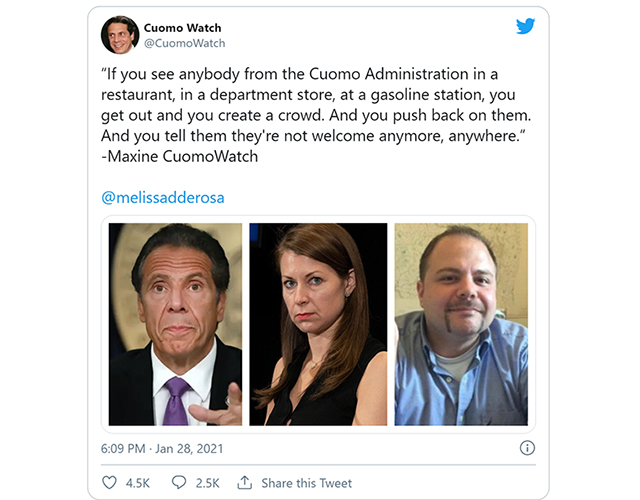 Well, it’s not an EXACT quote. It was actually a statement from last year by Maxine Waters that was directed at the Trump administration.

A LOT of Democrats were crazy outraged when they thought it was directed at Covid darling Cuomo, slayer of the elderly and sibling of CNN. And then they tried to talk their way out of things.

I mean it when I say a lot. Like, a LOT of them fell for it. It’s unreal. And no matter how they try to spin, this is proof positive of the double standard. Absolute solid 100% proof.