Fox News is now losing to CNN and MSNBC in prime time, which is really bad. In fact it may be historically bad.

The ratings below are from Tuesday night of this week in total viewers:

As you can see, MSNBC’s Rachel Maddow has the highest ratings with Cuomo on her heels, and both of them handily beating Hannity. CNN’s Anderson Cooper actually beat Tucker Carlson too. Yikes.

That was in total viewers, but the coveted 25-54 demo isn’t any better. Across the board, almost all Fox News time slots are getting beaten: 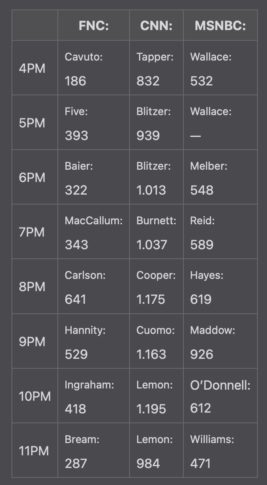 Here you can see CNN beating Fox News in the demo every hour, with MSNBC in second place every hour except for Tucker’s show.

Now I don’t look at Fox News ratings every day, but if this is any indication, oh how far they have fallen.