Last night Glenn Youngkin held a huge rally in Loudoun County, on the eve of what we hope will be his huge victory over Terry McAuliffe. Here’s what the crowd looked like:

Holy crap look at the crowd for @GlennYoungkin.

He’s also up in the polls 3 points.

Despite how large this crowd is, three different ‘reporters’ all managed to photograph the same guy with what appeared to be a newly sewn on confederate flag patch on his jean jacket:

WUSA9 reporter (embed doesn’t show full photo, but the confederate flag is in the photo): 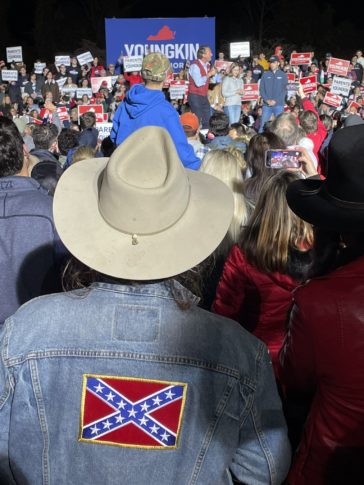 That’s right, all three of these reporters managed to find this same guy and photograph him. As Jewish Deplorable pointed out, this totally seems legit:

3 different angles from 3 different journalists, all conveniently standing behind a man with a newly-sewn confederate flag patch