President Trump, as he has done more than once over the last few months, went off on Fox on Twitter today over polling and even their board members.

It started (today) when Larry Sabato Jr. tweeted about the Reagan Foundation. The group is the latest object of strange affection from the left after they demanded that the RNC and the Trump campaign stop using Ronald Reagan’s name and image for Trump fundraising.

Sabato tweeted the link to the story from the Washington post, and then followed up with a second tweet that had this quote: “Frederick J. Ryan Jr., who chairs the Reagan Foundation board, is also publisher and CEO of The Washington Post. He declined to offer a comment for this column.”

Trump then retweeted that, blasting the Foundation, the Washington Post, and throwing in Fox while he was at it.

So the Washington Post is running the Reagan Foundation, and RINO Paul Ryan is on the Board of Fox, which has been terrible. We will win anyway, even with the phony @FoxNews suppression polls (which have been seriously wrong for 5 years)! https://t.co/fOi3AROxuz

Later he went at Fox again, along with the rest of the media, for their absolutely inexcusable refusal to air the truth about what’s happening across the country.

The Lamestream Media, including @FoxNews, which has really checked out, is refusing to show what is REALLY going on in Portland, Seattle, and other places. They want the American public to believe that these are just some wonderful protesters, not radical left ANARCHISTS!

Still, even a while later than that, he basically dared Biden to do an interview with Chris Wallace like the one he sat for just a week ago, when he retweeted a tweet of a clip from today’s Fox News Sunday where Wallace basically said Biden proved Trump right about being a chicken. 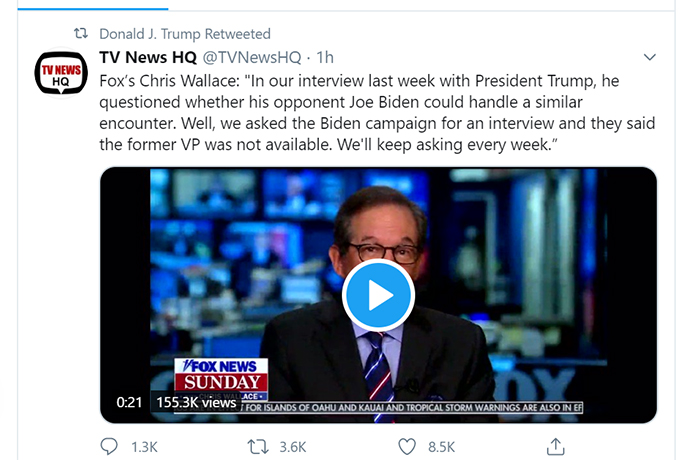 But we can probably assume ol’ Biden won’t be biting. That elevator ain’t going all the way to the top, and they’re working mighty hard to keep that from being even more obvious.