A few days after the CIA concluded that the murder of Jamal Khashoggi in Turkey was ordered by the Saudi Crown Prince, even suggesting that it was blindingly obvious, Trump has decided that the facts aren’t as clear and is not going to punish the Saudis for the grotesque murder of Khashoggi:

BREAKING: In statement on Khashoggi murder, President Trump stresses business and military business relationships in declaring that the US will continue to support Saudi Arabia, and acknowledges members of Congress who “would like to go in a different direction.” pic.twitter.com/5WI4pLUUY0

President Donald Trump rejected the idea of imposing additional penalties on Saudi Arabia for its role in the killing of U.S.-based columnist Jamal Khashoggi, stressing the importance of the U.S. alliance with kingdom.

In a statement headlined “America First!” Trump argued on Tuesday that Saudi Arabia provided a crucial bulwark against Iran in the region and buys billions of dollars worth of U.S. weapons. That, he signaled, outweighed the “horrible crime” committed against Khashoggi, a contributor to the Washington Post and critic of the crown prince.

“The world is a very dangerous place!” Trump said in the statement.

“It could very well be that the Crown Prince had knowledge of this tragic event – maybe he did and maybe he didn’t!” Trump said in a statement Tuesday.

“That being said, we may never know all of the facts surrounding the murder of Mr. Jamal Khashoggi,” he added.

Trump said that our relationship is with Saudi Arabia.

It sounds like Trump is pardoning more than just turkeys today. Early on Trump promised “severe punishment” for the Saudis if they were found to be behind this murder. Well the CIA says they were behind it, but Trump says he’s not sure?

I think what’s really going on here is that Trump spoke before he’d given it serious thought. In fact, we saw Pompeo not too long afterward taking a more cautious tone in terms of dealing with the Saudis over this. Trump’s mouth got ahead of him and now he’s got some egg on his face because he realizes, as much as he may want to, that he can’t punish the Saudis ‘severely’.

Sadly, this is more proof that the Saudi’s still have America by the “oil barrels”, if you know what I mean, and Trump can’t do much about it.

On the flip side, I am glad that Trump isn’t going to “severely punish” the Saudis at the detriment of the American people, just because he said he would.

Here’s the full statement by Trump: 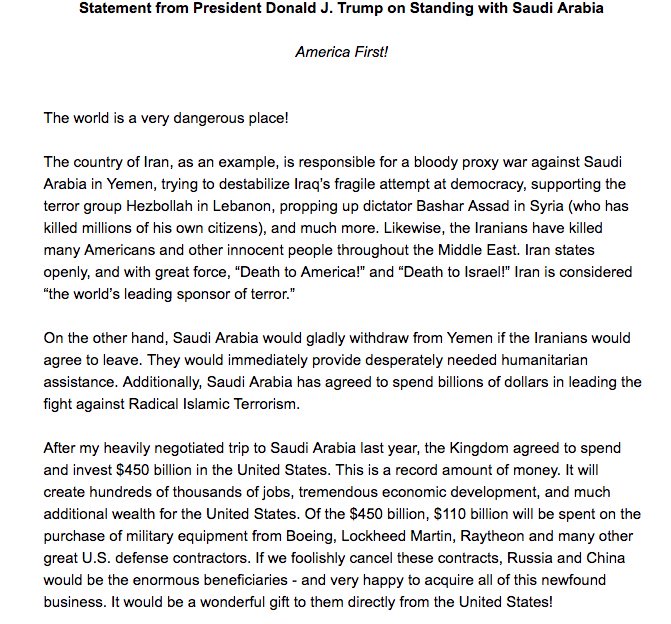 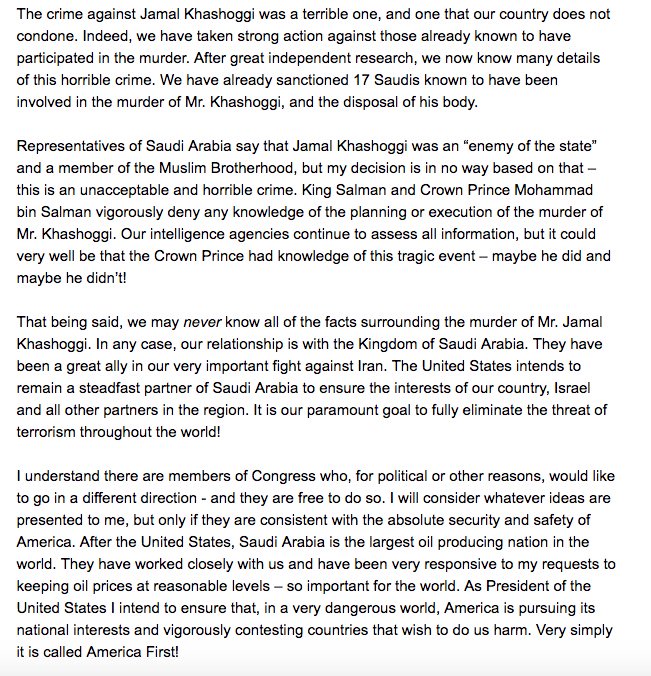