Liz Cheney and her phony January 6th committee brought in a ‘surprise witness’ today, a witness they call an aide to Trump.

Her name is Cassidy Hutchinson and she made some explosive and, quite unbelievable allegations against Trump.

Breaking: Donald Trump and Mark Meadows knew — before the rally — that members of the crowd had weapons on Jan. 6, according to Cassidy Hutchinson. Neither of them did anything about that.

Breaking. Cassidy Hutchinson: "The president said something to the effect of, 'I'm the F'ing president, take me up to the Capitol now.'"

Hutchinson says she was told Trump tried to grab the steering wheel of the Beast. He then reached toward the throat of a USSS agent.

Oh yeah, he also supposedly threw his plate of food against the wall when former AG Barr said there was no fraud in the 2020 election.

Trump has responded to these allegations on this Truth Social account, and as you could guess by the unbelievable nature of the allegations, he says they are absolutely not true: 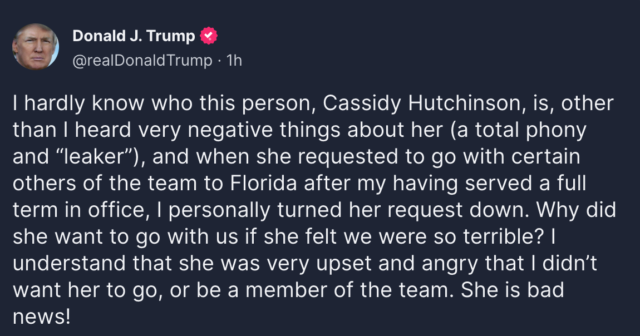