On Truth Social this weekend, Donald Trump blasted Fox News Channel for abandoning its viewer base, and therefore the TRUTH. They’ve done it a thousand times already but in this case, Trump is talking about their complete failure on even examining Dinesh D’Souza’s 2020 documentary film “2000 Mules.”

“Fox News is no longer Fox News,” said Trump on Saturday. “They won’t even show or discuss the greatest & most impactful documentary of our time, ‘2000 Mules.'”

“The Radical Left Democrats are thrilled – They don’t want the TRUTH to get out.

“Depressing to watch what has happened to Fox,” he wrote. 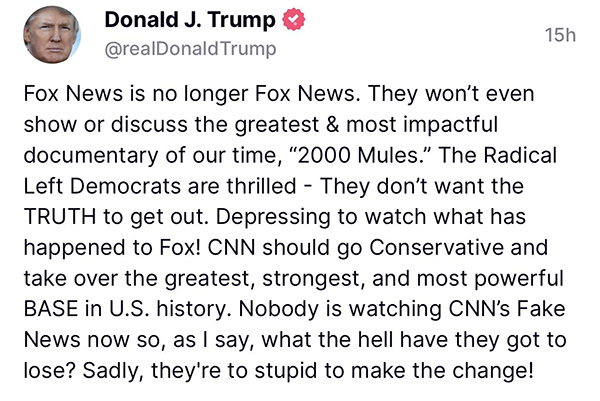 “CNN should go Conservative and take over the greatest, strongest, and most powerful BASE in U.S. history. Nobody is watching CNN’s Fake News now so, as I say, what the hell have they got to lose? Sadly, they’re to stupid to make the change.”

Well it’s definitely true that there ain’t a snowball’s chance they’d go conservative. CNN is going to pretend to be bipartisan for a while, but that won’t get them ratings, and then they’re just gonna go back to being the anti-Trump network. It’s their deepest wish that he become president again for the sake of their salaries. And if he doesn’t they’ll just become Never DeSantis and be equally as radical.

You watch. This “we’re going to be fair again” phase will be over faster than you can say “dangit put your pants back on, Toobin.”