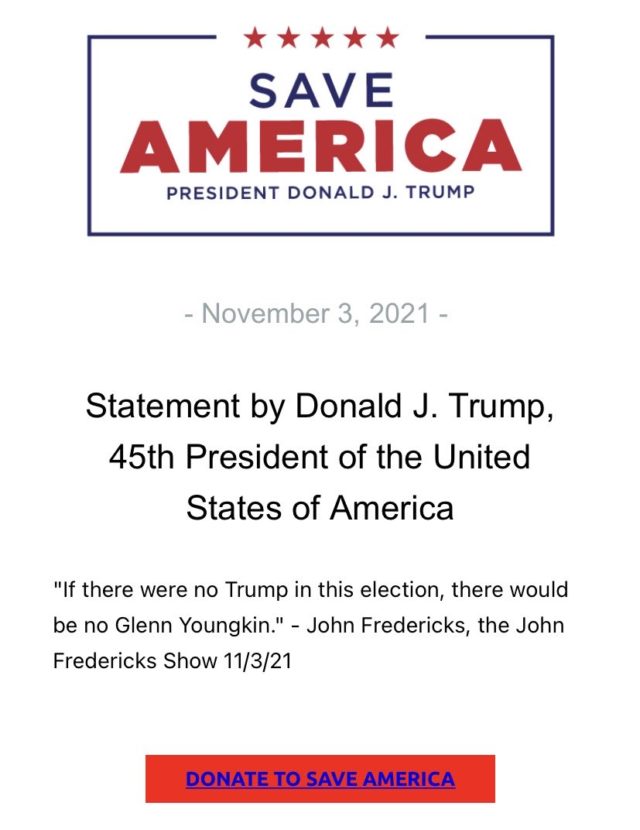 Trump quotes John Fredericks saying “If there were no Trump in this election, there would be no Glenn Youngkin.”

The reporting last night was that Trump endorsed Youngkin and he accepted that endorsement graciously, but Youngkin didn’t want Trump’s help on the campaign trail and it looks to have worked well for him in a blue state. But for some reason Trump still has to be the reason Youngkin won.

Whatever. Trump will be Trump. He can say what he wants, but the important thing is that Youngkin won.

Trump also put out a statement last night knocking McAuliffe for campaigning against Trump and noting how it didn’t work for him:

“It is looking like Terry McAuliffe’s campaign against a certain person named “Trump” has very much helped Glenn Youngkin. All McAuliffe did was talk Trump, Trump, Trump and he lost! What does that tell you, Fake News? I guess people running for office as Democrats won’t be doing that too much longer. I didn’t even have to go rally for Youngkin, because McAuliffe did it for me. Thank you to the MAGA voters for turning out big!”

McAuliffe did campaign against Trump and I think it’s hilarious that it failed. McAuliffe is still trying to live in the past and Trump is right to mock him for it.