It was revealed by Nick Arama at Redstate this morning that AOC wasn’t actually in the Capitol building when she hid in her bathroom because Ted Cruz sent rioters were going to kill her or something:

But a few important things to note that seem to have been left out of this whole story.

According to Rep. Nancy Mace (R-SC), who has an office in the same hall as AOC, two doors away, there were never any rioters in their hall so there was never any physical danger from rioters coming in at any point.

.@AOC made clear she didn’t know who was at her door. Breathless attempts by media to fan fictitious news flames are dangerous.

My office is 2 doors down. Insurrectionists never stormed our hallway. Egregious doesn’t even begin to cover it. Is there nothing MSM won’t politicize? pic.twitter.com/Tl1GiPSOft

I don’t know about you, but it sure sounded to me like AOC was suggesting she was in the Capitol building where the riot was taking place.

Jack Posobiec posted a map showing where AOC’s office was in relation to the Capitol Building: 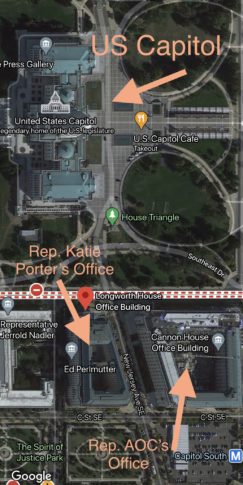 AOC has since attacked the article as ‘manipulative’ and now says she was on the ‘Capitol Complex’:

This is the latest manipulative take on the right.

They are manipulating the fact that most people don’t know the layout the Capitol complex.

We were all on the Capitol complex – the attack wasn’t just on the dome.

The bombs Trump supporters planted surrounded our offices too. pic.twitter.com/jI18e0XRrd

People were trying to rush and infiltrate our office buildings – that’s why we had to get evacuated in the first place.

The attempts of attackers & publicly available communications show how they tried to gain access and share location info on finding members for physical harm.

The bombs surrounded her office building? Um that’s a streeeeetch. The bombs that were found were planted at both the headquarters of the DNC and RNC, which are outside of the Capitol complex but very close to it. They weren’t ‘surrounding’ the office building.

It’s already been reported that what AOC said she thought was a rioter Ted Cruz sent to kill her was really a Capitol police officer there to protect her. But that didn’t stop her from denigrating the officer:

As it turns out, however, as my colleague Bonchie reported earlier, AOC said in her Instagram drama that the person who came to her office was a Capitol Police officer. But she denigrated the officer who came to help, claiming he “didn’t feel right” and that he was looking at her “in all of this anger and hostility.” Her staffer reportedly wondered if he would have to fight the officer and suggested that he might put them in a “vulnerable situation.”

.@AOC describes a Capitol Police officer bursting into her office, says his presence “didn’t feel right” and that he was looking at her “in all of this anger and hostility.” Her staffer reportedly wondered if he would have to fight the officer. pic.twitter.com/LCj2JmmFP6

Cop was probably in a panic trying to ensure that Congress members were safe. AOC overreacted to his demeanor and now denigrates him as if he may have been trying to do her harm. Ridiculous.

I don’t find it hard to believe that AOC was worried that a rioter might have come to her office, but once she found out it was a cop, she should have adjusted and realized she had just overreacted. Instead it feels like she’s trying to milk this incident for every bit of sympathy she can get.