President Trump’s interview with Piers Morgan was not as hostile as we were led to believe in that teaser video which came out yesterday.

According to NBC News, Trump gave them an audio recording of the interview that shows a cordial and thankful Piers Morgan and President Trump at the end of the interview.

It does not show Trump storming off the set as the preview leads you to believe:

An audio recording obtained by NBC News appears to show that former President Donald Trump’s highly publicized interview with Piers Morgan did not end with Trump storming off the set, as edited promotional video clips suggest.

Instead, according to the recording, which was provided by Trump’s spokesman, the two men thanked each other and laughed at the conclusion of the interview for Talk TV, a subsidiary of Rupert Murdoch’s News Corp.

Talk TV, which is set to debut Monday, teased the interview — billed as “the most explosive interview of the year” — in a video summary that is dramatized with cinematic music and portrays Trump as being angry about the content of questions Morgan asked. The video and the alleged walkout were reported in an article by the New York Post, which is also owned by News Corp.

“Turn the camera off,” Trump says at the close of the video clip as he appears to rise from his chair. “Very dishonest.”

But the audio of the end of the interview appears to tell a different story. The two men laughed and thanked each other, the recording shows. There are no signs of Trump’s storming off set.

“That was a great interview,” Morgan says in the audio at the end.

Trump agrees with a “yeah.”

“Thank you very much. I really appreciate it,” Morgan says.

That’s when Trump says, “Turn the camera off.” By then, the former president had already risen from his chair, according to his communications director, Taylor Budowich, who supplied the audio to NBC News.

So what about Trump saying Piers Morgan was “very deceptive”? Even that was misrepresented in the teaser.

It was actually in reference to the interview going far longer than it should with Morgan continue to ask questions even though he kept saying ‘last question’.

Budowich alleged that the show’s producers deceptively edited the video by splicing the sound of Trump saying “turn the camera off” to make it falsely appear as if he made the statement while he was rising in anger.

As for Trump’s saying “very deceptive,” he made the comment after a frustrated Budowich called out Morgan for dragging out the interview and falsely and repeatedly saying he had one last question, only to ask more.

Trump had expected the interview to last 20 minutes, Budowich said, but it stretched on for more than an hour. Toward the end, Budowich called for the last question, but the audio appears to show that Morgan asked several more, including one related to “Celebrity Apprentice.”

I know teasers are supposed to reel you in and make you want to watch something, but they aren’t supposed to lie in order to do so.

If you want to listen to the audio given by Trump to NBC News, Liz Harrington posted it here.

Trump responded to the teaser last night with this statement: 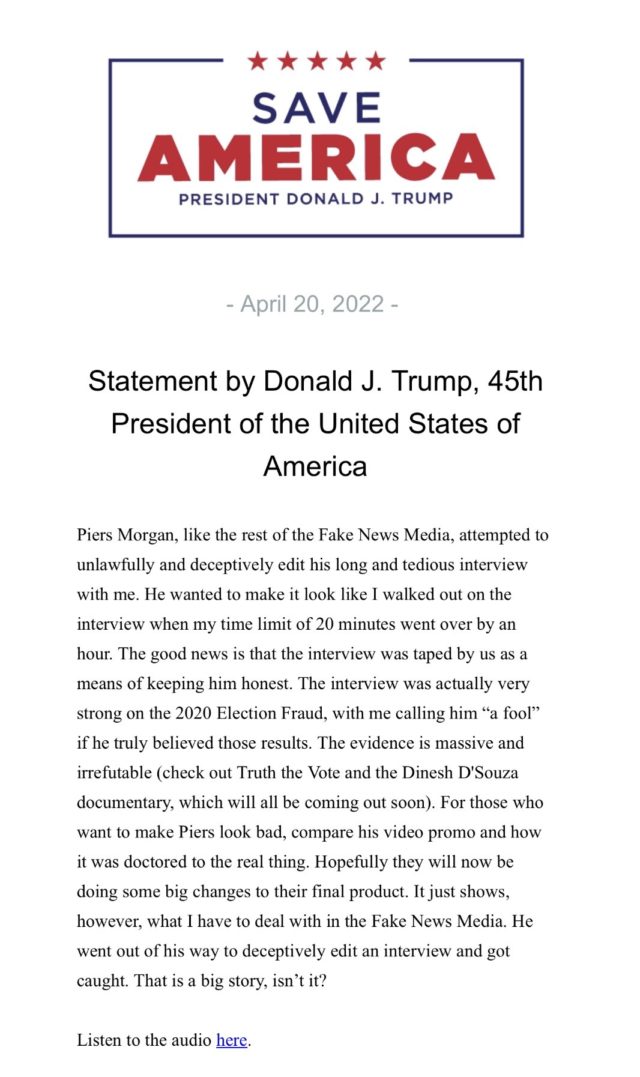