The Supreme Court, thanks to John Roberts, ruled against Republicans tonight in their bid to try and get Pennsylvania to only allow ballots by election day:

CNN – Mail-in ballots in Pennsylvania — a critical state for President Donald Trump’s reelection chances — will be counted if they are received within three days of Election Day even if they do not have a legible postmark, the Supreme Court ruled Monday.

Four justices dissented from the order, signaling that the court was equally divided, with Chief Justice John Roberts siding with the court’s three liberals.

The ruling is a loss for state Republicans who sought to require that only ballots received by Election Day be counted.

You can see in the ruling that Alito, Thomas, Gorsuch and Kavanaugh would have given Republicans the injunction they were seeking: 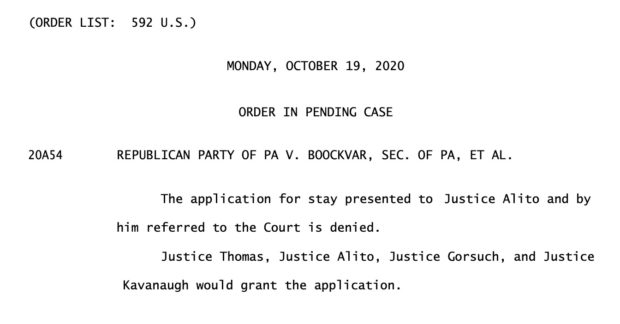 Andy McCarthy said the ruling is despicable and will set up the Supreme Court to appear to be picking the winner:

More likely now there will be post-election chaos and unrest. And Roberts is ensuring that if Supreme Court has to make a ruling post election, which is now more likely, it will appear to be picking the winner, casting cloud of illegitimacy over next administration. https://t.co/IO48FV2uC1