The US Air Force has gotten so politically correct that they are now training young cadets at their academy to use gender neutral language they describe as “person-centered”.

For example, they are to use ‘parent or caregiver’ instead of ‘mom or dad’, because some children have two moms or two dads.

A diversity and inclusion training by the United States Air Force Academy in Colorado instructs cadets to use words that “include all genders” and to refrain from saying things like “mom” and “dad.”

The slide presentation titled, “Diversity & Inclusion: What it is, why we care, & what we can do,” obtained by Fox News Digital, advises cadets to use “person-centered” and gender-neutral language when describing individuals.

“Some families are headed by single parents, grandparents, foster parents, two moms, two dads, etc.: consider ‘parent or caregiver’ instead of ‘mom and dad,'” the presentation states. “Use words that include all genders​: ‘Folks’ or ‘Y’all’ instead of ‘guys’; ‘partner’ vs. ‘boyfriend or girlfriend.’”

“Not ‘Colorblind’ or ‘I don’t see color,’ but Color Conscious,” it adds. “We see Color/Patterns AND VALUE people for their uniqueness.”

Below is a screenshot of the training program: 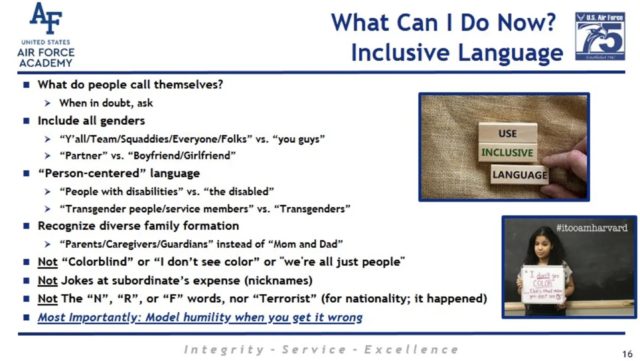 Not only are cadets to use gender neutral langauge, but they are doing bizarre diversity training exercises:

The diversity and inclusion (D&I) training also includes an exercise asking cadets to separate into small groups and write down as many “G-Animals,” or animals that start with the letter “G,” that they can think of in one minute’s time.

“What does this activity show us about the power of combining our diverse perspectives?​” the activity asks. “If this were an operational USAF/USSF [United States Space Force] challenge (think COA [course of action] development) what risks might be present if we did not fully leverage the diversity of our group?”

Below are the screenshots of the exercise: 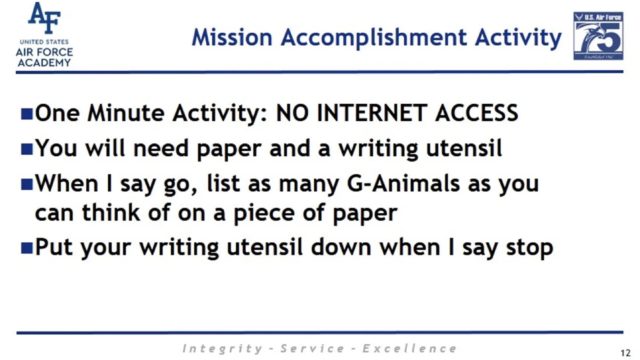 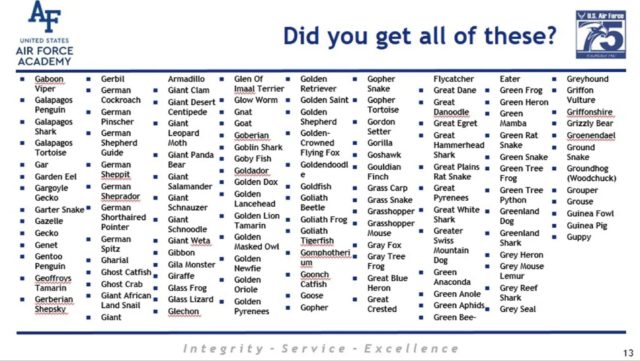 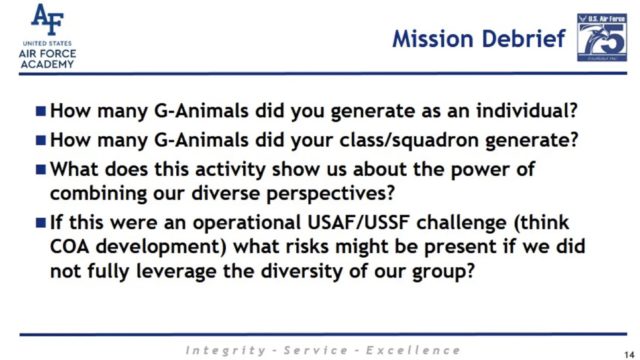 I have no idea what this is supposed to acheive and it sounds ridiculous. And it just shows you how far gone the Air Force is under Biden, that they would train cadets like this.

You can read more about this at Fox News.