A man with cerebral palsy found himself in the center of mayhem in Columbus Ohio, where his car was destroyed by crazed mob of rioters. Police have released video now and are looking for the suspects who did this:

A horrifying scene. Fortunately someone got the disabled man out of the vehicle and took him to safety while this mob destroyed his car. It happened at the end of May, but police have only recently asked for the public’s help to catch these thugs.

Here’s more from The Blaze:

Eldon Hawkins is 58 years old and has cerebral palsy, the Columbus Dispatch reported.

On the evening of May 31, he drove to get dinner and flowers and ended up in the middle of a protest in downtown Columbus, Ohio, WBNS-TV said.

“I was at the intersection, and I got the green light. I was trying to toot my horn, thinking, ‘Hey guys, look at the light,'” Hawkins told the station. 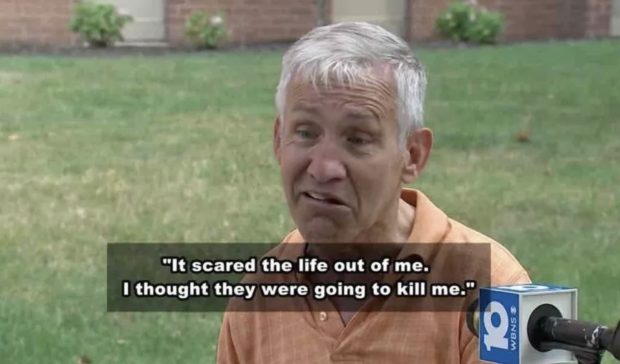 He was blocked — and video of the incident shows he tried backing up his car and hit a person on a bicycle with the rear bumper.

Video shows the bicyclist, who didn’t fall to the ground, quickly began beating on Hawkins’ car — and a bunch of other left-wing George Floyd protesters followed suit and swarmed the vehicle.

“They threw a bicycle on my windshield and started kicking my doors and windows,” Hawkins said during last week’s city council meeting, the Dispatch reported. “It scared the life out of me.”

The video shows rioting protesters jumping on his red Buick, throwing objects at it, and smashing out its windows; at one point the trunk popped open, and protesters grabbed and tossed its contents.

“I thought they were going to kill me,” he added to WBNS.

Hawkins said there were “some nice people who came and pulled me out of the car” and took him to the curb, the Dispatch reported.

Police told WSYX-TV that the protesters also acted violently toward those who tried help him and stop the violence.

“Reacted with a lot of anger and hate until soon after they realized this gentleman is handicapped,” Hurst added to WBNS.

This just breaks my heart for the man and outrages me at the thugs who did this to him and his car. Thank goodness there were some good people there to pull him to safety and protect him. Otherwise who knows what this angry mob would have done to him.