A Qatari sociologist has created a video tutorial for Muslims on how to beat your wife in a permissible way, with love.

Here’s a summary of the wife-beating tutorial from Memri:

On March 29, 2019, Qatari sociologist Abd Al-Aziz Al-Khazraj Al-Ansari uploaded a video to the Al-Mojtama YouTube channel in which he gave a demonstration and explanation about how to beat your wife in an Islamically permissible fashion. He said that it is not necessary to beat one’s wife frequently, but that a man – as the leader of the house – must sometimes exercise his authority and discipline his wife “out of love” so that “life can move on.” Al-Ansari said that the beating should be light and painless, and that it should make the wife feel her husband’s masculinity and strength, as well as her own femininity.

Al-Ansari then demonstrated how to beat one’s wife on Nayef – a little boy who might be his son – by slapping him on the shoulders, grabbing him and shaking him, and saying loudly: “I told you not to leave the house! How many times do I have to tell you?” Al-Ansari said that punching your wife or striking her in the face is prohibited and explained that it is in some women’s nature to like domineering, authoritative, violent, and powerful husbands. For additional clips from Al-Ansari, see MEMRI TV clip no. 7108 Qatari Sociologist Abd Al-Aziz Al-Khazraj Al-Ansari Mocks The West, International Women’s Day: These Filthy Secular Dogs Celebrate Women’s “Freedom” To Act Like Whores, March 8, 2019, and clip no. 7085 Search For Cohen And The Gang – Qatari Sociologist Blames The Jews For The New Zealand Massacre In An Antisemitic Tirade, March 15, 2019.

Memri captured a few screenshots from the video and I’ve added the correlating quotes from their post:

“How does a husband beat his wife? He gives her a disciplinary beating out of love. He loves her. The beating should be light, and must make the wife feel her femininity and her husband’s masculinity.” 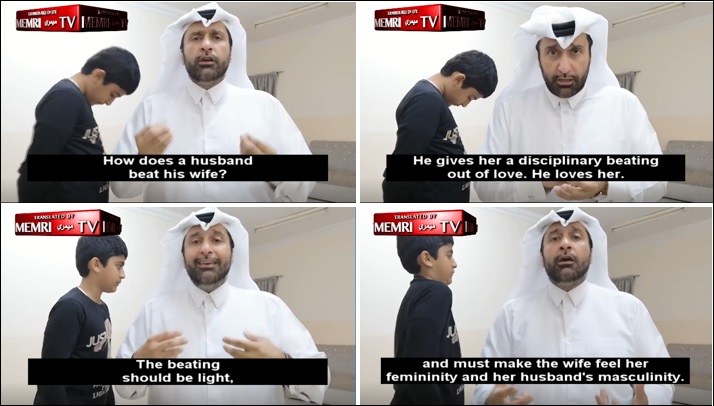 “Now, let’s see how Islam teaches how to beat your wife. Let’s imagine that Nayef here… How are you, Nayef? Nayed is obviously a boy, but let’s imagine that he is the wife. How should a husband beat his wife? First, he must ‘admonish her’ – in other words, he should advise her. Then, he should refrain from sharing a bed with her. If all of this doesn’t help, we start the beating as a last resort. What is beating in Islam? Beating in Islam… Wait, don’t move… The husband must make his wife feel his strength.” 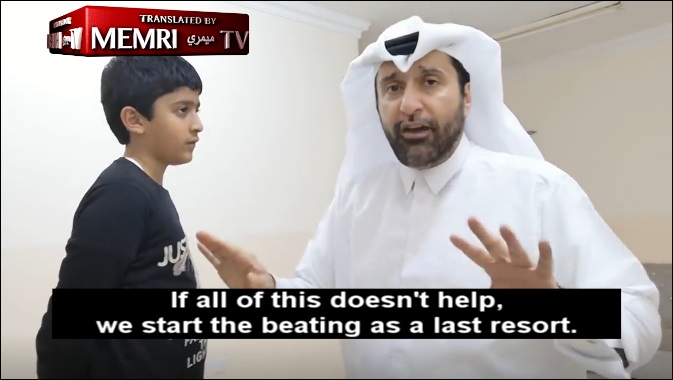 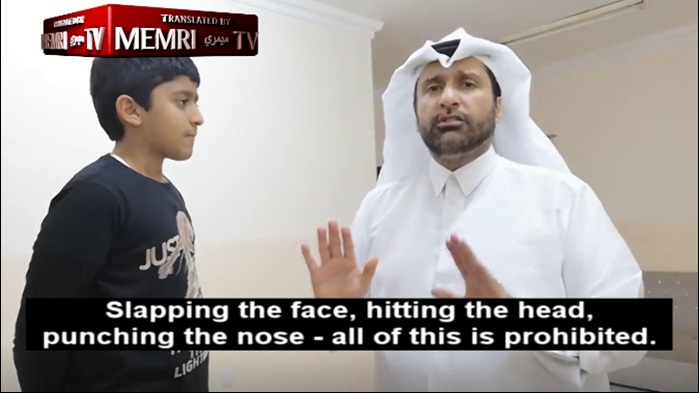 The author of this video might argue that he created this tutorial because some Muslims are too violent. And he is quite clear that this beating doesn’t leave bruises or draw blood.

Still, that in of itself says a lot about the culture, that a video like this would be needed.

You can watch the video if you like. But I think you get the gist: