Kate Cohen, a columnist at the Washington Post, penned an article the other day explaining how upset she was that there weren’t more fictional abortions on TV: 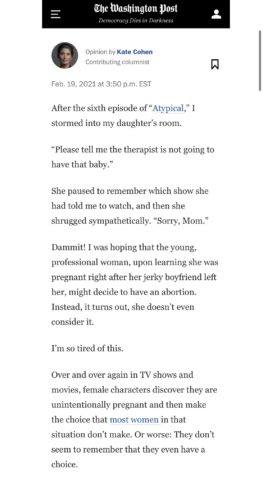 She’s angry that a fictional character kept her fictional baby. This is just flat-out evil.

While it’s horrible that Planned Parenthood exists and abortions aren’t yet illegal anywhere in this country, what Cohen is really angry about here is the pro-abortion indoctrination side of the abortion industry. She wants to see far more fictional abortions even though they are already all over TV:

all feature characters who get abortions. we really arguing pro-abortion views are underrepresented in pop media? https://t.co/BeFwhn7vK0

Cohen is part of the pro-death culture that is brainwashing our children and teens into believing that getting an abortion is just another medical procedure to get rid of something that doesn’t even matter. This is nothing new, but given how pervasive abortion is in our country, it’s just amazing to me that she actually penned a column complaining about this.

Jesus can’t come soon enough to rid the world of this scourge.