It is no surprise to learn that the Washington Post tells huge whoppers, and especially unsurprising that they spread enormous lies in service to and defense of Critical Race Theory. It’s the very latest in haute leftwing fashion, after all, to don the trappings of CRT and pretend at having worn them all along. But when, in that cloying service, WaPo decided to smear writer, filmmaker, Manhattan Institute fellow, and guest at the White House for a meeting in October Christopher Rufo wasn’t ABOUT to let them get away with their ongoing Big Lie.

They interviewed him for their hit piece, and despite his setting them straight, they ran with their false narratives, knowing they could get away with it.

Rufo, in thread on the hellsite, fired back and brought receipts. I’m going to embed his entire thread one tweet at a time. For Lie #4 and #5, I’ve embedded the image from the tweet within the post.

The Washington Post's @laurameckler spent three weeks preparing a hitpiece against me.

In this thread, I will expose five flat-out lies, from the fabrication of a timeline to multiple smears that are easily disproven by documentary evidence.

This is how the media lies.🧵

Lie #1. The Washington Post presents critical race theory as a benign academic concept, obscuring the divisive nature of the ideology and refusing to address the huge amount of evidence on abusive CRT programs in K-12 classrooms. pic.twitter.com/NlvapesdbX

Lie #2. The Washington Post fabricates the timeline of events surrounding my involvement in President Trump's executive order on critical race theory in the federal government. pic.twitter.com/btXcgoN4Cb

Lie #3. The Washington Post falsifies a direct quotation, claiming that I said it is "so obvious" that my strategy was to "conflate" unrelated items with CRT. I never said this and challenge the Post to produce the audio recording to support their claim—or retract it. pic.twitter.com/kGboTRx8YU

Lie #4. The Washington Post claims that the Treasury Department never said that all white people are racist during a diversity training seminar—but I have the original source documents that prove the Post's claim is false. pic.twitter.com/zfRHeqi1L4 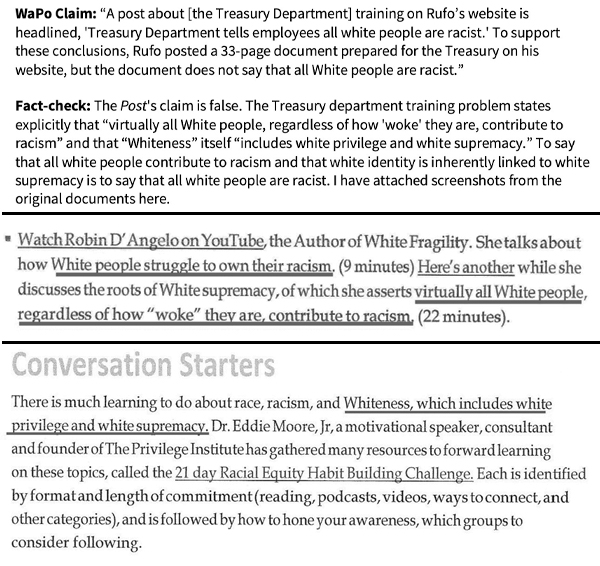 Lie #5. The Washington Post claims that my reporting about a "power and privilege" training at a Cupertino elementary school never happened. But I have hard evidence from a parent and the school's own principal, who confirms that the training did occur. pic.twitter.com/NKofn55OWP 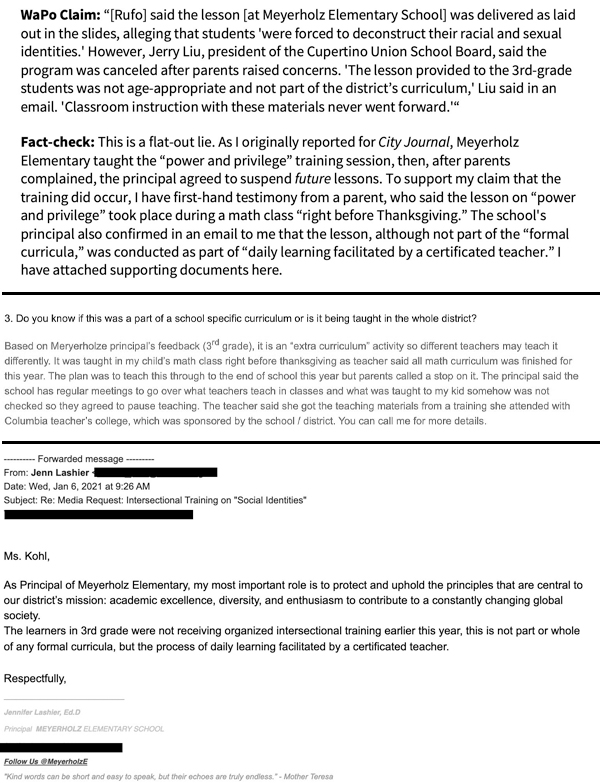 The Washington Post has attempted to smear me with five verifiably false claims. I call on the editors to issue an immediate correction and retract all of the false statements.

Democracy dies when the media lies.

Yep. That is HOW you do it.

P.S. Please help push back against this fake story by writing a polite message to Washington Post Executive Editor @SallyBuzbee and Managing Editor @cameronbarr. Their email addresses are available here:https://t.co/tb2xMEXZ3Q

Like I said the other day, people have to ACT.