A 46-year old idiot injured himself but thankfully nobody else when he smashed his car into a Trump merchandise store this week, a moment which was caught on the store’s cameras.

Police charged Sean Flaherty of Raynham with reckless operation of a motor vehicle and malicious destruction of property. So for the MSM playing it down like the motive is unclear, that the guy with the 2015 Jetta covered in liberal crap and anti-Trump stickers did it on purpose. You know, maliciously. 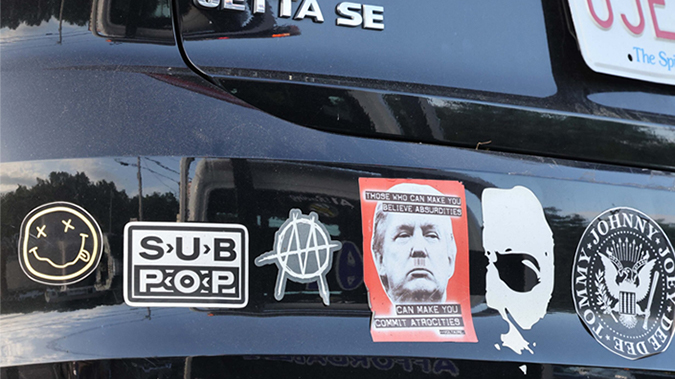 From the Easton Mass. Police Dept.

At approximately 5:10pm on Thursday June 16, 2022, Easton Police Officers were dispatched to 620 Washington Street (Route 138) for a reported vehicle crash into a building.

Upon arrival, Officers discovered that a 2015 Volkswagen Jetta had crashed into the New England for Trump store located at the west end of the building.

The vehicle was operated by Sean Flaherty, age 46 of Raynham, MA, who was later transported to Good Samaritan Medical Center with non-life threatening injuries. One employee who had been in the store at the time, was not injured during the crash.

At this time Flaherty has been charged reckless operation of a motor vehicle and malicious destruction of property.

Just another example of the violence being unleashed by Democrats across the country, which the media continues to refuse to lay blame at their feet for.

Last night a 45 year old man from Raynham drove his car into a ‘New England for Trump’ store in Easton.

The store owner tells @NBC10 that the man said he was “hearing voices that told him to do it” pic.twitter.com/26PWbNUpQs