In the same D.C. mob where abortion enthusiasts are handing out Supreme Court justices’ home addresses, Maxine Waters and other Democrats are soliciting law-breaking and courting mob violence on Friday.

This isn’t even in hiding anymore. It’s just out in plain sight defiance of the law and invitation to take the law into the mob’s own hands.

Watch Waters calling for DEFIANCE and saying to HELL with the Supreme Court.

Maxine Waters and Al Green among members of Congress who've shown up outside the Supreme Court to denounce the end of Roe. "Women are going to control their bodies, no matter how they try and stop us," Waters says. "The hell with the Supreme Court, we will defy them." pic.twitter.com/SCkicoQj68

And here they are handing out home addresses in the SAME mob.

Waters points to that mob full of people losing their minds and giving out Justice’s home addresses and says ” you ain’t seen nothin’ yet!”

Hard to be more explicit than that. And it’s the same mob where AOC was stoking violence, too.

.@AOC right in here with the furious protestors outside of SCOTUS, telling people it's gonna take more than elections to restore abortion rights and to take to the streets.

"Elections are not enough!" pic.twitter.com/F1UG4K9HQa

(I like how even videos of AOC are crooked.)

There are hundreds of Tweets just like the one in this screenshot, including some with many thousands of retweets that I don’t want to give any extra attention to but are very easy to find. 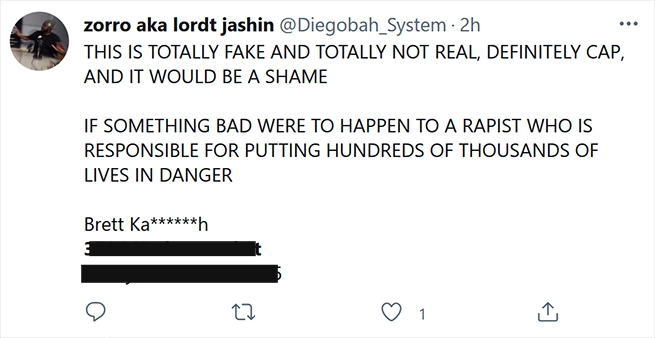 Yet somehow nobody’s account has been banned. Amazing right? Guess it’s not who you know, it’s who you’re threatening that counts.