Border officials are seriously trying to get the attention of Congress to not only fund, but do something about this border crisis that continues to skyrocket out of control:

FOX NEWS – The number of migrants apprehended at America’s southern border skyrocketed last month to levels not seen in over a decade, with U.S. Customs and Border Protection reporting nearly 133,000 arrests in May.

The number surpassed 144,000 when counting migrants deemed inadmissible — more than a 30 percent increase from the prior month and double the influx recorded at the beginning of the year.

“We are in full-blown emergency,” a CBP official said Wednesday.

The number of apprehensions was the highest monthly total in more than 13 years. In April, authorities recorded 99,304 arrests.

The latest figures could embolden President Trump amid tense negotiations with Mexico over the immigration crisis.

Here’s a graph that shows just how bad it’s getting down there: 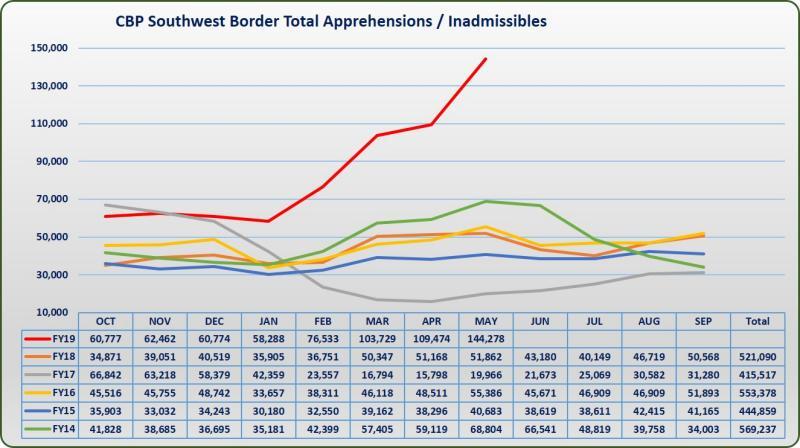 “We are bursting at the seams,” a CBP official told reporters Wednesday. “It is unsustainable and can’t continue.”

Administration officials insisted the CBP is unable to house this many people.

Fox reports that because of the emergency at the border, resources are being diverted from other areas which is causing a slow-down for people crossing the border, whether it be for recreational or commercial travel.

I get that Republicans in Congress don’t like Trump’s new tariff threat on Mexico. I don’t either. But it’s not like he’s doing this in a vacuum. And when faced with the reality of the situation down there, I can understand why he’s doing it and don’t blame him for trying to mitigate the emergency situation down there.