Law enforcement says the pipe bombs that were incited into being placed near the Capitol building on January 6th were put in place a day before, on January 5th.

Either Trump’s speech traveled back in time or … 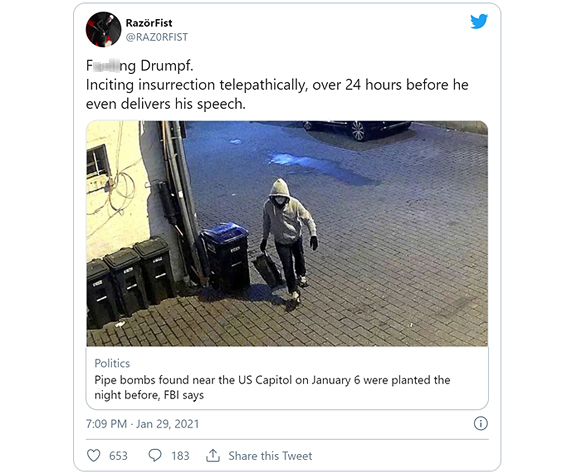 Here’s more from the Washington Post, of all places.

The two pipe bombs that were discovered on Jan. 6 near the U.S. Capitol shortly before a mob stormed the building are believed to have been planted the night before, according to a law enforcement official familiar with the investigation and video footage obtained by The Washington Post.

The explosive devices, which were placed blocks from one another at the headquarters of the Republican and Democratic national committees, have been largely overshadowed by the violent attempted insurrection at the Capitol. But finding the person suspected of planting both bombs remains a priority for federal authorities, who last week boosted the reward for tips leading to the person’s arrest from $50,000 to $75,000.

On Jan. 5 at 8:13 p.m., a security camera captured the suspect carrying a backpack, according to a resident who reviewed the footage and provided a copy to the FBI. The suspect was walking eastbound on C Street SE, headed toward an entrance to an alley that curved toward the Republican National Committee building. The Post did not obtain that footage but confirmed the homeowner’s account with a law enforcement official familiar with the investigation.

Well well. Would ya look at that.