The Trump haters over at the The Lincoln Project have been found to be sharing Iranian disinformation. Specifically, what they shared was this:

What they are referring to is a story from Florida Today that first reported on threatening emails from the ‘Proud Boys’, even though they weren’t from the Proud Boys at all. Here’s one such email:

These were pretty scary messages for people to get in their inboxes. Some of them included people's home addresses. pic.twitter.com/bVS5Z1s0L0

But it turns out it was all Iranian disinformation, as revealed by DNI Ratcliffe yesterday. He held a presser saying that both Russia and Iran were trying to create confusion and influence the election against Trump.

After Ratcliffe held his press conference exposing it, House Democrats quickly tweeted this: 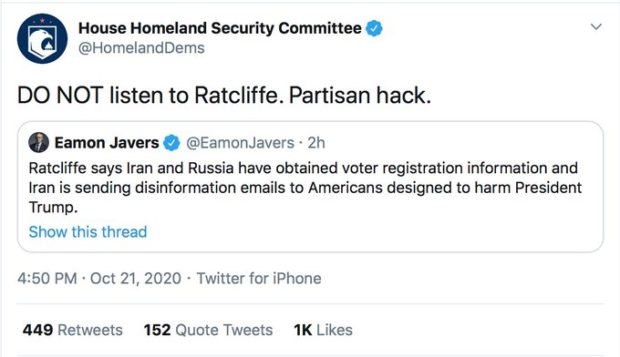