HUD Secretary Ben Carson just savaged Maxine Waters in response to a letter she sent him on homelessness, and it’s amazing:

“My mother always taught me that people shouldn’t throw rocks, especially while they live in a glass house,” Carson wrote, according to a copy of the letter obtained by POLITICO. “Because of that wise lesson, I was a little surprised to read your hostile letter to President Trump regarding the record number of homeless Americans in California, particularly in your district.”

Waters had written Trump on Oct. 28 demanding answers on reports that the administration is mulling moving homeless people off the streets in California.

“Your shamelessness knows no bounds,” Waters wrote in that letter.

Carson threw the charge back at her today in his response: “Shamelessness is a career politician of 30 years laying blame,” he wrote.

“Shamelessness is allowing more than 55,000 Americans to live on the very streets they represent,” Carson added, referring to the homeless population of Los Angeles city and county.

“To me, the most compassionate, obvious, and logical solution would be to get as many homeless Americans off the streets — with a roof over their heads — as soon as humanly possible,” he said.

“I have sent multiple letters to your office and requested numerous meetings, but each time you’ve refused,” Carson wrote. “Basic manners elude you and it seems that instead of producing results, you’re more interested in producing cheap headlines at the President’s expense — like a true career politician.”

He also alluded to the dust-up over his comments about transgender people this fall. Carson has maintained that he was merely repeating a concern that “big, hairy men” were trying to enter women’s shelters and refused to apologize for the remark when he appeared before Waters’ committee last month.

“Shamelessness is allowing anyone other than a biological female into a battered women’s shelter,” Carson wrote today.

Wow, that was brutal. Gotta love Carson’s Trumpian bluntness as he doesn’t pull any punches in exposing Waters.

Politico said Waters didn’t respond to their requests for comment.

You can read the full letter below: 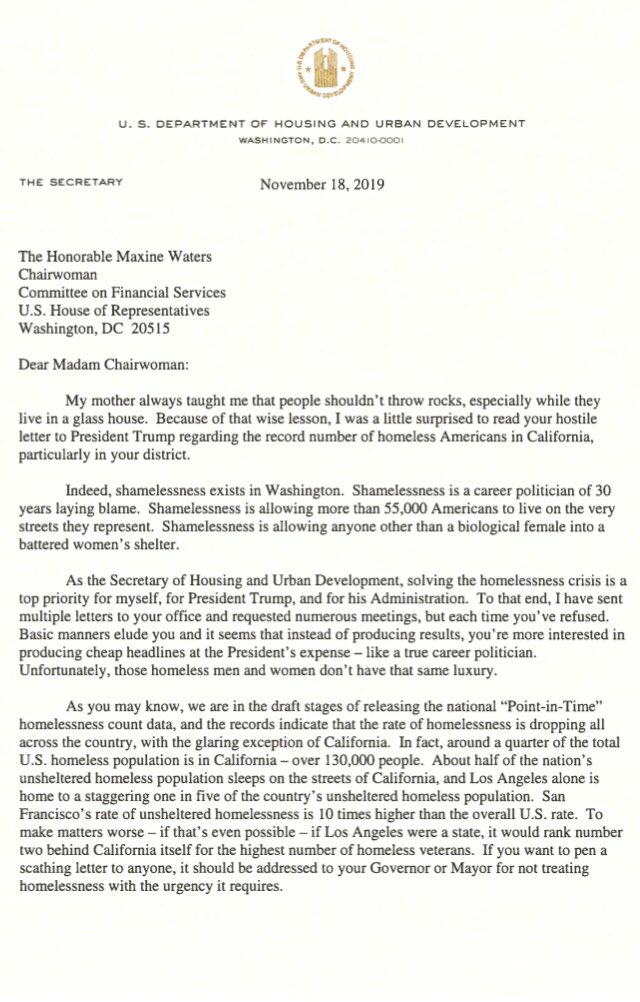 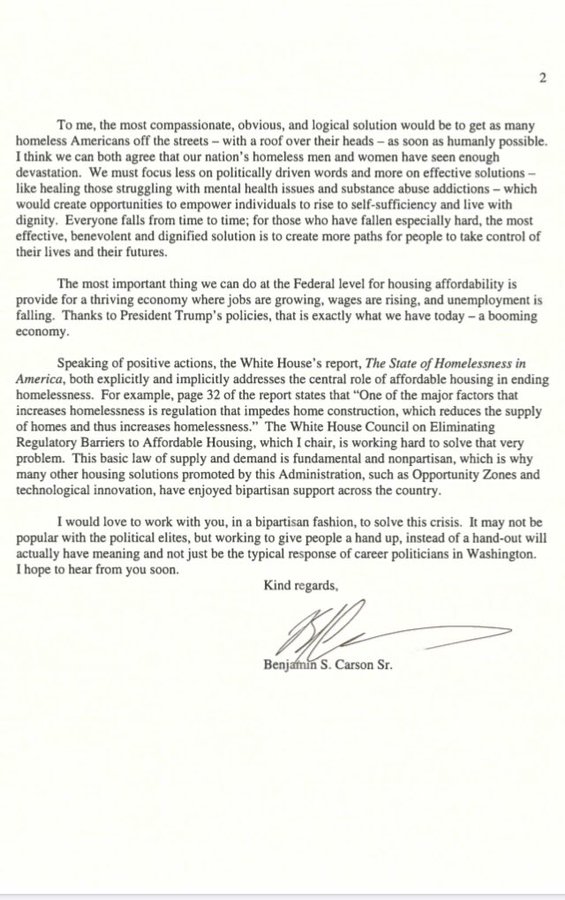