Today AOC celebrated the demise of the economy by gleefully tweeting about the crashing oil industry in a now deleted tweet:

You absolutely love to see it. This along with record low interest rates means it’s the right time for a worker-led mass investment in green infrastructure to save our planet. cough 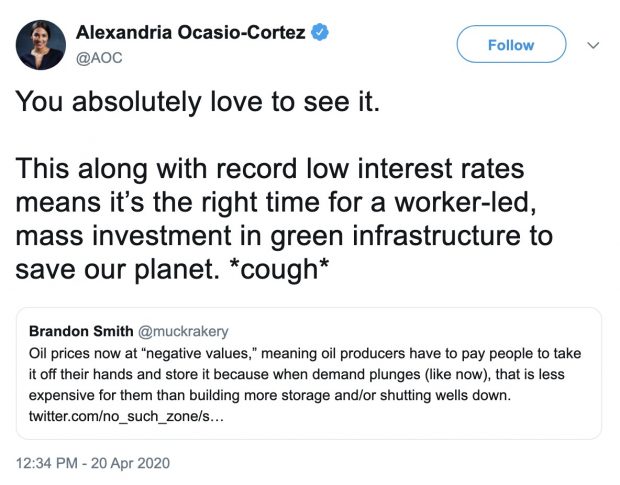 She’s responding to reports that the cost of oil has gone into negative numbers, meaning oil producers are paying people to store oil.

After deleting her tweet, she followed up with this one:

This snapshot is being acknowledged as a turning point in the climate movement.

Fossil fuels are in long-term structural decline. This along w/ low interest rates means it‘s the right time to create millions of jobs transitioning to renewable and clean energy. A key opportunity. https://t.co/UqT8DI5u2I

It didn’t help. She’s being excoriated on social media for celebrating the loss of people’s jobs in the faltering economy in order to push her green agenda. Below ND’s congressman responding to her tweet:

This is not an ideological exercise @AOC. People’s jobs are evaporating. Lives are being ruined in real-time. North Dakota companies that have taken decades to build have been destroyed in hours. Any public official that loves to see this does not deserve to hold office. pic.twitter.com/o7FbAb2ham

Because the Green New Deal was never about the environment. It is about winning elections. And that is fine as far as it goes.

But openly celebrating the economic destruction of families and communities because it fits a political narrative is unacceptable and unbecoming of a member of Congress.

There are plenty more, but here’s a few good ones…

Bubblegum idiot cheers the loss of millions of energy industry jobs and destruction of 401ks and Pensions. What a truly vile person @AOC is. pic.twitter.com/DUoR5oGEk2

You only need thousands of people dead and millions of people unemployed to enact your vision, which is basically what we’ve been saying all along. https://t.co/yduPvqNg60

“Now that global pandemic has killed thousands and left millions unemployed, we can finally get what we want” is not the genius take she or her instagram stand think it is, which is why you don’t see the Dem nominee jumping into the boat.