Kissing ass and taking names? That’s not really a thing. Unless you’re these jerks: Michael Simon, Emily Abrams, and the @trumpaccproject. See they sucked up to AOC today about their project for tracking American citizens in order to punish them.

It’s an idea Alexandria Ocasio Cortez floated on Friday, and Simon, who deleted his tweet like a wuss, was quick to jump in and brag about.

Is anyone archiving these Trump sycophants for when they try to downplay or deny their complicity in the future? I foresee decent probability of many deleted Tweets, writings, photos in the future 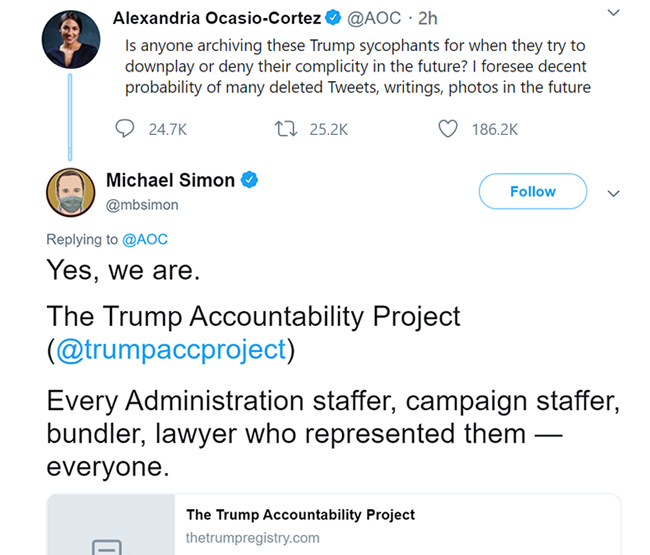 Obviously Mikey the Simp didn’t realize he’s not intimidating. And neither is fascist AOC.

Come get some, simp. pic.twitter.com/l0xYmyzMfy

A little early for the gulag lists to start, isn't it?

Feel free to put me on your list, Sunshine. Then feel free to take your Stalinist list and shove it.

This woman is a genocidal maniac. https://t.co/9DfdZvdoFv

AOC: 'We're the fascists we've been waiting for!' ✊✊✊ https://t.co/HZmOZCIXtf

Fuck your "accountability," you petite tyrants.

This reads like someone who is barely literate but wants to impress their teacher https://t.co/yCsKLCDuqq

Nothing to see here, just a retired CIA dude defending putting Americans on government lists for their political thoughts. Orwell, we have arrived. pic.twitter.com/tIsJy0FNdf

Not JUST Obama bros, though. Emily Abrams used to be with Pete Buttigieg. You see, when you scratch…

Well here, you know the saying:

This is what that dumb “project” says, by the way.

We should welcome in our fellow Americans with whom we differ politically. Tens of millions of Americans voted for Donald Trump, and they are entitled to have their votes counted and to have their opinions heard. We may disagree, but wish them well.

But the world should never forget those who, when faced with a decision, chose to put their money, their time, and their reputations behind separating children from their families, encouraging racism and anti-Semitism, and negligently causing the unnecessary loss of life and economic devastation from our country’s failed response to the COVID-19 pandemic.

Aww honey, you don't want to open this door. This never ends well for the other people who have skeletons, and we know Obama had bones and bones.

Yeah, y’all really don’t want to try us out. It won’t go how you think. Kinda like how nothing ever goes like y’all think. Learn from that experience. Instead of learning the really, really, REALLY hard way.

The “Trump Accountability Project” deep-sixed the link to their hit list, but the Internet is forever. https://t.co/Ki32gdOb3Q

Also, these are both great points.

They think they've won for one day and they're already circulating Enemy of the State lists and promising heretic and disloyalty trials.

Joaquin Castro published a list of Trump donors in his own area and the media defended him. You didn't think these tactics were going to stop, did you? https://t.co/v5EQ3JFXty

Neither could Emily Abrams, who used to work for Pete Buttigieg.

She locked hers up too. pic.twitter.com/4IBk9rF1Hl

Go figure. Hiding their OWN tweets after making a hit list from the tweets of others.

I guess he didn't like being held accountable for his actions.

Nail on the head:

Creators of mobs don't like it when the mobs come for them?

They love mobs until they hate them.