It’s just being reported that suspicious packages were sent to the homes of both Hillary Clinton and former President Obama.

Both packages were intercepted by the Secret Service:

Here’s the official statement from the Secret Service: 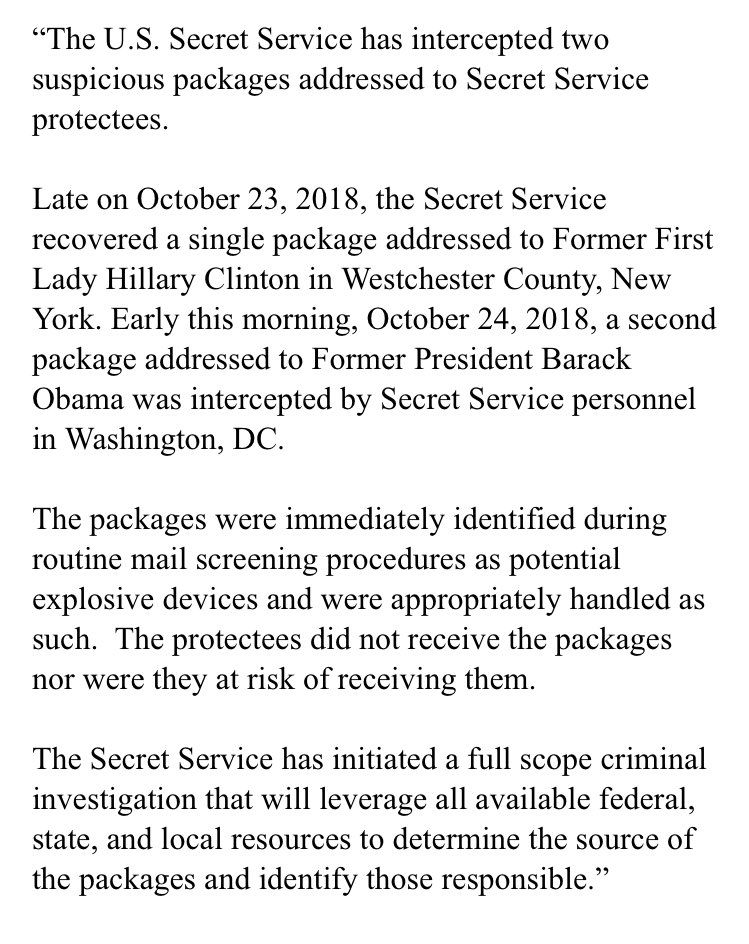 This just a day or so after someone put a similar explosive device in the mailbox of George Soros, which was detonated by police.

“Multiple law enforcement officials tell @ABC the preliminary belief is the devices found at the Soros, Clinton and Obama locations appear to be of similar pipe bomb style construction and contained explosive material”

The FBI is also reporting that the bombs were “functional”:

NYPD says they investigating a suspicious package at the Time Warner Center at Columbus Circle. Several CNN employees say they are currently evacuating the building.

CNN is now broadcasting from DC. CNN says anchors, staff in NYC were evacuated after NYPD said it was investigating a "suspicious package" sent to the Time Warner center. pic.twitter.com/hBgrOpyDKb

UPDATE: Reuters reports, citing a person familiar with the situation, that there was no suspicious package addressed to the White House. https://t.co/dybJYYrl6b

CNN just walked back its report that a suspicious package was sent to the White House, too. So far, only Soros, Clinton, Obama, CNN.

And the Secret Service told @johnrobertsFox that reports of a suspicious package found in mail destined for the White House are NOT true. https://t.co/KOIiozFU9c

Here’s a pic of one of the bombs that is floating around on the internets:

This photo obtained by @ABC and confirmed by two law enforcement sources shows the device recovered from @CNN by the NYPD bomb squad. pic.twitter.com/HFzTMSoJXG

Also, Andrew Cuomo said a suspicious package was sent to his office as well…

At the press conference, they said that the bomb that was sent to CNN WAS a live bomb…

OK, so look I had to address this. Some people are saying that it looks like an ISIS flag is taped to the device that was found:

That doesn’t quite seem right to me – it looks more like the shiny reflection of the tape. If you look at the other parts where there is black tape, it has the same sort of effect. Also why would ISIS just target the media and Democrats when they’re ones who look the other way on terror attacks? Anyway, I wanted to let you all know this theory is floating out on Twitter, which is terrible, and also I’m addicted to it. The end.

So it turns out Andrew Cuomo was full of it when he said he was targeted as well. Just jumping onto the victim bandwagon.

BUT… there WAS a package sent to Maxine Waters as well:

BREAKING: A suspicious package addressed to Rep. Maxine Waters was intercepted at a Capitol Heights processing facility that handles mail going to the Capitol, according to 3 congressional leadership sources.

The package was addressed to her office but never made it that far.

A Dem aide confirms to BuzzFeed News a package addressed to Maxine Waters was intercepted at a Congressional mail facility.

The bomb squad has cleared the scene at this Congressional mail sorting facility where a suspected explosive device reportedly addressed to Rep. Maxine Waters was found. Witnesses say the facility was locked down for hours as the device was removed pic.twitter.com/nHkUhcDwsY

I’m updating the above as I get new information, so keep refreshing…