Just as we were falsely censored almost two week ago by Facebook, They have now put Mark Levin in their targets and censored his humongous page as well:

1. Facebook has just sent us this message. It’s a clear effort at censorship. Every link I post is from a legitimate source. pic.twitter.com/yLIz7kO6gL 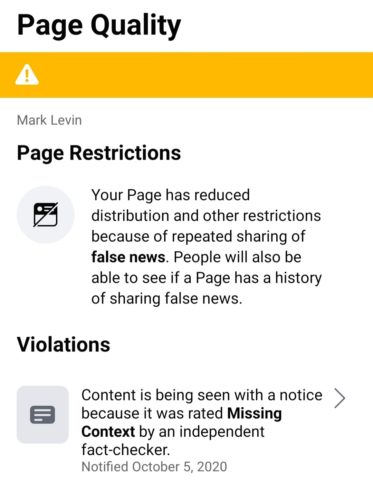 (The photo above is what Levin shared in his tweet. I just pulled it out to show it in its entirety.)

Levin notes it’s clear that Facebook is trying to influence the election:

2. But because so many people are seeing what I’m posting and we’re within weeks of the election it’s clear that Facebook is trying to influence the election’s outcome. It’s also clear Facebook is pushing a leftwing agenda. I’ll address this tonight on radio.

This is the same conclusion we came to as well. Facebook is clearly using these ‘fact-checkers’ as an excuse to silence the right and try and push Joe Biden over the finish line.

Levin was probably the target all along with his huge following. My guess is that Facebook censored little fish like me first so they could then have a seemingly legitimate excuse to claim Levin shared fake news and censor him. He shares some of our content through his social media platforms, which we very much appreciate.

Levin said in the tweet he’ll cover this on his show tonight, so we’ll be sure and let you know what he says about it.