Yesterday we told you about Shelley Luther being fined and jailed for seven days for keeping her hair salon open during the pandemic. If you missed her epic response to the judge, who tried to get her to admit she was wrong, you can watch it here.

Since yesterday there’s been an outcry from many, including government officials like Ted Cruz and Dan Crenshaw:

7 days in jail for cutting hair?? This is NUTS. And government officials don’t get to order citizens to apologize to them for daring to earn a living. https://t.co/3rulRlN0gE

These punishments are NOT just. They are not reasonable. Small-minded “leaders” across the country have become drunk with power. This must end. https://t.co/d31aEZg8b4

Now Texas Governor Greg Abbott has released a statement disagree with the judge and calling for the release of Luther:

I love how Abbott referred to her as a ‘Texas mother’, no doubt a reference to her epic comments yesterday. 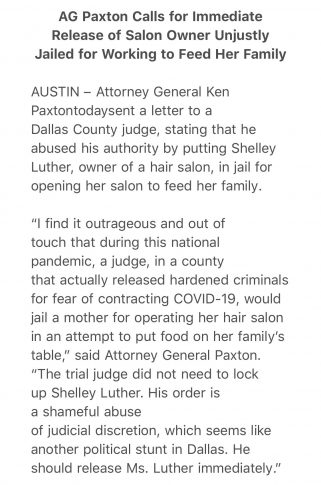