At least some law enforcement in Seattle and Portland are just about fed up with the nonsense, the criminality, and the chaos the cities have endured for over 85 continuous nights. We saw some of that last weekend when they kicked shield and took names in a scene straight out of a movie.

Today’s instance of being fed-up is less big screen by a lot … at least if you have any taste in movies at all. But it’s still great to see.

As Andy Ngo pointed out, rioters in these Democrat cities sometimes throw balloons filled with human waste at police. They did so last night and again today during the day.

The cops in Portland raised a pretty a good question about that.

Not sure whose job it was to make these…. 💩🎈
Just when we thought we had seen it all in over 80 days. pic.twitter.com/9TxqT1tjlk

Seriously. Whose job is it to fill balloons with feces? What exactly is the procedure to do that? Are they Antifa Interns? Is it special BLM corps … minus the L?

Great question. It’s funny to mock them, but what went down was not a laughing matter overall. A gagging matter in some cases though.

This is from today’s police report: 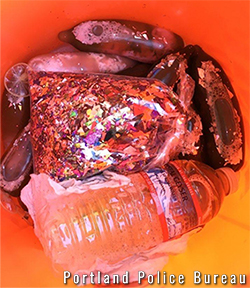 Hundreds of people gathered in the street on the Southwest 3rd Avenue side of the Justice Center and in the park across the street. PPB’s sound truck provided announcements asking for the groups to separate and move to the sidewalks and also to self-monitor for criminal activity.

Officers located a bucket containing condoms filled with an unknown liquid substance and a water bottle with what appeared to be urine along with several shields staged near the park at Southwest 4th Avenue and Salmon. These items were confiscated.(PHOTOS)

There is a lot more. Two warring sides did battle in the streets in Portland today. It was absolute chaos, and it’s probably just the beginning.