There is hardly a better way to pick out the wusses in the world then to show them a failed attempt at manliness and watch them get all hot and bothered over it. And that’s just what’s going on this Sunday morning.

Tucker Carlson was at what appears to be a fishing and/or sporting goods store while he’s on his fly fishing trip up in Montana. Some dorky nerd with a dumb name thought he could play tough guy and have a big dramatic moment for the camera.

It didn’t go how he wanted.

Libs are playing it up like it was the big dramatic moment anyway. Which is pretty funny and shows what a bunch of weak losers they are.

Granted, they would normally call this an act of domestic terror or an example of white privilege (White guy at fishing store feels entitled to cause a disruption? Not very woke, fella!) but that’s beside the point.

The point is, Lincoln Project doofuses should leave the confrontational video game to BLM, Antifa, or even 20-somethings at CPAC.

So…a drunk @ProjectLincoln progressive neo-liberal cult shill, with a record of working for left wing non-profits, is paid to breathe alcohol into @TuckerCarlson's face… this is important how? https://t.co/fQWGu8wTXZ

Like I said, leave tough guy videos to the professionals, Lincoln geeks. Because this? This was just sad. But funny. But sad.

Update: One more tweet, it’s too good to pass up.

Is the loser who went out of his way to have someone video him harassing Tucker in public for some viral content the model for the new Pregnant Male Emoji? The likeness is uncanny! #SoBrave https://t.co/c4JnuoAklz 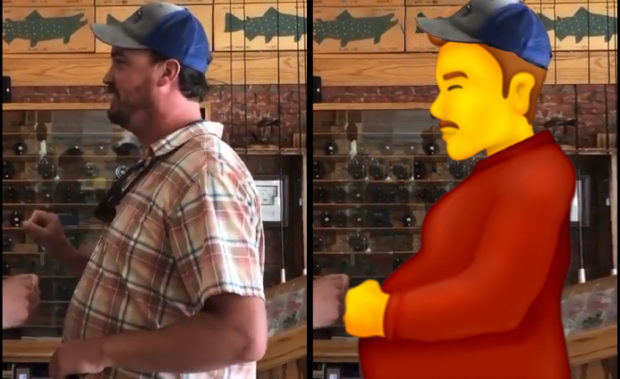