MSNBC treated North Carolina Lt. Gov. Mark Robinson as someone to be feared because he’s Black and owns guns. Therefore he must be a violent criminal, said MSNBC.

North Carolina’s lieutenant governor essentially said he owns AR-15s in case he feels the need to violently overthrow the government. (via @MaddowBlog) https://t.co/sNfUclqtmd

Yeah, would you like to know what he actually said? The Charlotte Observer quoted him.

“I’ll tell anybody, I got them AR-15s at home and I like to go target shooting and all that. That’s not what they’re there for,” Robinson said. “I’m not ashamed to say it, I’m probably not supposed to say it, but I’m gonna say it anyway — I got them AR-15s in case the government gets too big for its britches,” he continued. “‘Cause I’m gonna fill the backside of them britches with some lead.”

You know, an explicit intent of the Second Amendment, expounded upon for the next 150 years by luminaries, politicians, heroes and patriots ad nauseum? That.

But white male producer for Rachel Maddow, Steve Benen, got really KAREN about it: 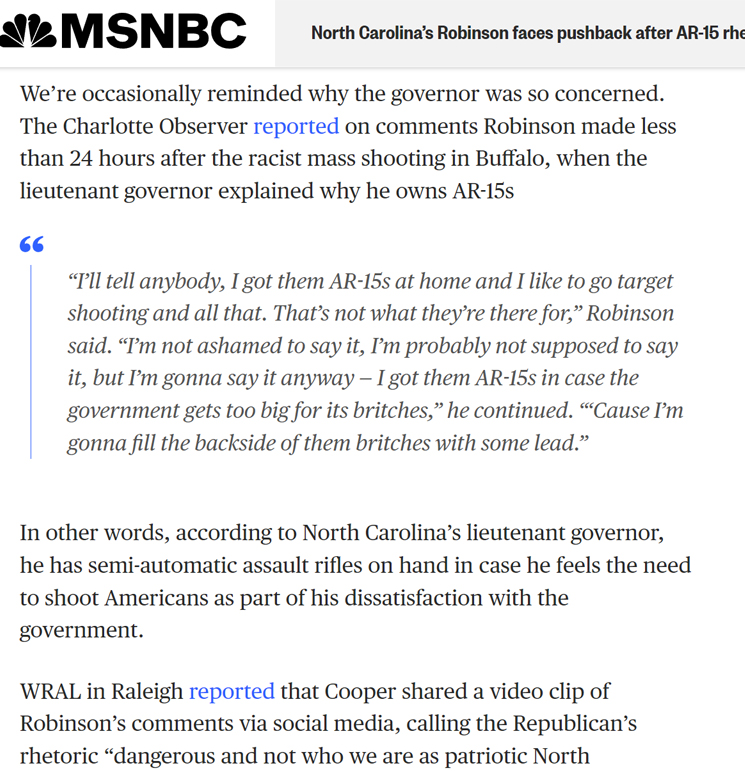 The left’s brains are either incapable of grasping the fundamental premises of freedom, or they are merely unwilling to grant the meaning or implication of those premises for fear of losing their totalitarian aims to those principles.

Or some combination of that.

Either way, it not only shows that Robinson isn’t the dangerous angry one to be feared, as the racist Steve Benen paints it, but it also shows why he is so totally sane and correct.

Because the racists like Benen and Maddow and MSNBC? They’re everywhere and they hold many levers of power. Being prepared to defend yourself is the only sane reaction.